Dave Shea, author of CSS Zen Garden was a morning speaker at An Event Apart 2009.What separates visual design tools from coding tools?
Written by Andrew Mager, Inactive on Dec. 7, 2009

Dave Shea, author of CSS Zen Garden was a morning speaker at An Event Apart 2009. 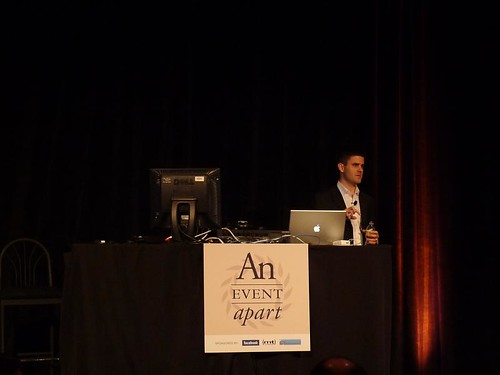 What separates visual design tools from coding tools? The best way to establish visual thinking is by using "GUIs".

You need a source-code view, syntax-highlighting text editor. A very cool tool that Dave Shea showed us how to redesign a website on the fly by sampling the colors of a photo on a page, sending it to Photoshop to get color data then applying them to HTML elements by dynamically applying them to a CSS file.

This is a cool idea, but it could be faster. He could use ImageMagick on the PHP side and get the CSS values all in one shot. 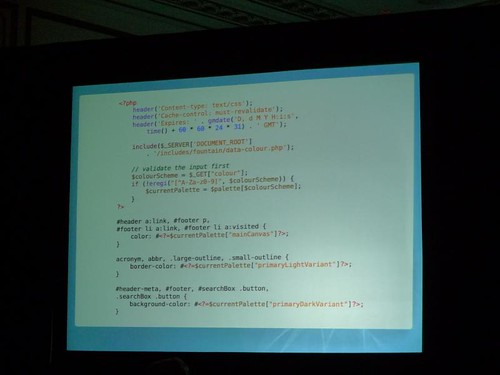 Shea then spoke about "user interface" design. Instead of designing a single page, we are building interfaces.

Once JQuery became more usable, designers could start implementing Javascript a lot easier. But it can be dangerous if they don't start following good coding practices.

2010 is a really exciting time on the web. As a front-end client-side engineer, there is a bucket of CSS tricks that we should all know about by using progressive enhancement.

The <canvas> tag is all Javascript. Once designers unlock the knowledge to write object-oriented user interfaces in JS, we won't be able to use the <canvas> tag. We are better off learning Processing JS.

Webkit is not on mobile, so we are kinda stuck.

CSS 3 and HTML 5 are awesome drafts, but it will be a while before the Microsoft team catches up to the development cycle of the rest of the web.

In the meantime, yes, designers should learn how to code. They become a new level of designer when they learn to use web standards and practices.

I consider myself "in-the-middle" just like everyone else who works on the display layer of the web. The best part is the learning process.

Shea had some really good points, but I think we need to work harder as designers to get our hands dirty in the code.