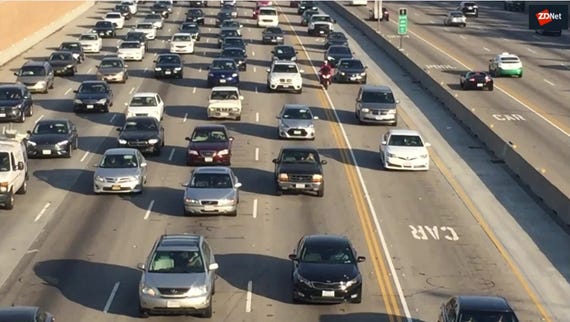 There are lots of questions swirling around self-driving cars, but if you're an industry-watcher this is the biggest: How are we going to get from 0 to 1 percent adoption?

Without further ado, I give you scrappy upstart Drive.ai.

The company, which is developing retrofit kits to make dumb cars autonomous, raised $50 million in a series B round last week. That's mere drops in the very deep bucket of autonomous car development budgets, but Drive.ai has a strategy that's got a good shot at achieving notable penetration faster than Google or any of the major auto manufacturers. How can that be?

First, some context: Right now there are two related but distinct races in the world of self-driving cars. The first is the race to develop the best real-world, road-tested technology. The second, and no less critical, is to write the playbook for market implementation.

The major auto manufacturers are assuming self-driving tech can be phased in one model year at a time. Waymo, the autonomous car company run under Google's parent Alphabet, is wagering it will be able to compete on both price and reliability by developing sensors and hardware in-house alongside its software stack.

Uber, which has catapulted itself into the mix, is betting self-driving technology will eliminate the need for private car ownership altogether, and its tripping all over itself to make that happen faster.

All of those are sound strategies, and all are based on a larger goal of conquering the consumer market. But the enterprise market is a softer target. If you can demonstrate cost savings and streamlined performance to an enterprise customer, you're going to win business.

It's not that the big companies have ignored enterprise. As my colleague reported, Waymo recently announced an enterprise partnership with Avis. But the big hurdle is getting enterprise customers to spend lots of money replacing cars that work well as it is. That's why most plans to bring autonomous vehicles to market at scale are still looking years out, when today's fleets are turned over naturally due to age.

For companies developing technology to retrofit existing dumb fleets, that represents a huge opportunity in the interim.

An instructive analog can be found in telematics, a broad class of technology that encompasses all the devices and applications you find in connected cars.

Sellers of devices that plug into the OBD-II ports of dumb cars and trucks to monitor fuel usage, optimize routes, and send data over networks have found a huge market with enterprise customers. Those connected features are becoming standard on the cars and trucks enterprise customers buy to fill out their fleets, but it's the companies bridging that gap that are winning market share today.

Retrofitting existing fleets to drive autonomously isn't a totally novel idea. It's the tactic that propelled self-driving truck company Otto to a huge acquisition by Uber, for example. While commercial truck-manufacturer Daimler aims to have an autonomous truck to market by 2025, Otto has worked to develop a $30,000 kit to quickly convert trucks already on roads.

But Otto's future is uncertain now that it's subject to the ambitions and baffling missteps of Uber. There are even signs Otto's new parent has either let its truck aspirations flag or is killing them off altogether.

Drive.ai, a Silicon Valley startup founded by former lab mates out of Stanford's Artificial Intelligence Lab, is entering the mix with a similar offering aimed at a broader swath of vehicles.

The startup's retrofit kit, which is still in development, uses camera-based and LIDAR sensors to complement a self-driving software stack grounded in deep learning. It's not exactly a plug-and-play solution, so don't expect put one of these on your Honda Accord in the next couple years.

That's why it makes sense to target enterprise customers, which can absorb the installation and conversion costs more easily across fleets of hundreds of cars. The larger the fleet, the lower the cost per conversion, and the bigger the benefit in reduced accidents, better fuel economy, and less wear and tear, all of which are promises of self-driving technology.

Last week's series B funding will allow Drive.ai to develop its first pilot projects with select partners. The company is already one of the few California startups to have one of the state's coveted autonomous vehicle testing permits.

A whole bunch of self-driving cars are coming to roads near you, and maybe a lot sooner than you thought.