A UK company is developing lightweight and edible food drones to bring supplies to hard-to-reach areas in times of disaster.

The Somerset-based Windhorse Aerospace last week presented its Pouncer design to Priti Patel, the UK's Secretary of State for International Development. The drone is nine feet wide, self-navigating, and capable of a 50 Kg payload, the company said.

Next year Windhorse plans to demonstrate Pouncer being launched from a C130 Hercules cargo aircraft, carrying 30 drones which will glide "a minimum of 35Kms from 10,000ft and landing to an accuracy of seven meters", the company said.

The chairman of Windhorse, Nigel Gifford said that Patel's attendance at the presentation demonstrated that Pouncer, "already has tremendous public support which was shown by the 2 million views and counting of the demonstration which it has accrued already".

This is how Google drones will deliver your packages, and keep your pets safe Drones could be a threat to pets and powerlines, so Google has come up with a new robot to help.

Gifford was one of the team behind the unmanned Ascenta high altitude, long endurance platform that was acquired by Facebook in 2014 as part of its internet global connective programme.

Pouncer is intended to address the need for a fast reactive vehicle to deliver food aid into countries with remote, difficult, damaged, and broken infrastructures by overflying the difficulties and placing food exactly where it's needed, the company said.

After 11 years with the British Army where, Gifford's service career culminated in 1976, when he was a member of a successful expedition to climb Mount Everest. He believed that his experience there made moving to providing food supplies by drone a natural follow-up.

The Pouncer has an airframe skin made from biodegradable starch-based thermoplastic, filled with spars of compressed and vacuum sealed foodstuffs. The Pouncer's fuselage is filled with the staple diet of those receiving supplies and carries water and fuel for cooking. It is to be produced in various weights to meet differing requirements.

Speaking earlier this year at the Global NSF conference, Gifford said that his company, "addresses the indigenous cultural food requirements head on, and turns 'cash aid' directly into calories consumed, not unwanted or discarded waste".

It replaces the standard humanitarian daily ration (HDR), "in acceptability and nutrition, and advances the 2,200 Kcal offering by a long way," he said.

"We would like to see it convert into a calorific uptake per person of at least 3,500 Kcal per person with minimal wastage. This would be a great improvement on the present low-yield HDR.

"We are in the process of setting up a charitable trust that will have the UAVs built along with the food spars and other parts of the airframe."

The intention is to make assembly simple and, "will not require a specific skill set". The estimated cost of the largest airframe "build and fill" is targeted to be under £100 and deliver approximately 200lbs of food. 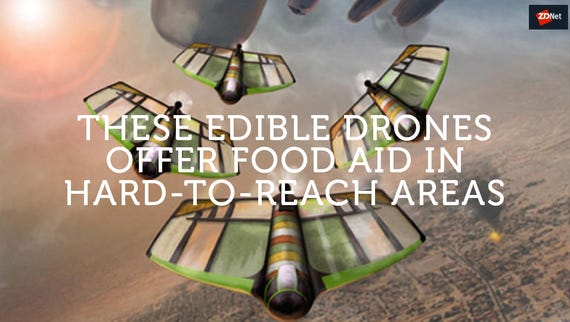 Join Discussion for: This edible food drone could offer aid in...