How NASA chooses tech for the International Space Station, and why AI could help get us to Mars

Tech support, but in space: A look at the tech which astronauts use on the ISS.
Written by Steve Ranger, Global News Director on July 4, 2018 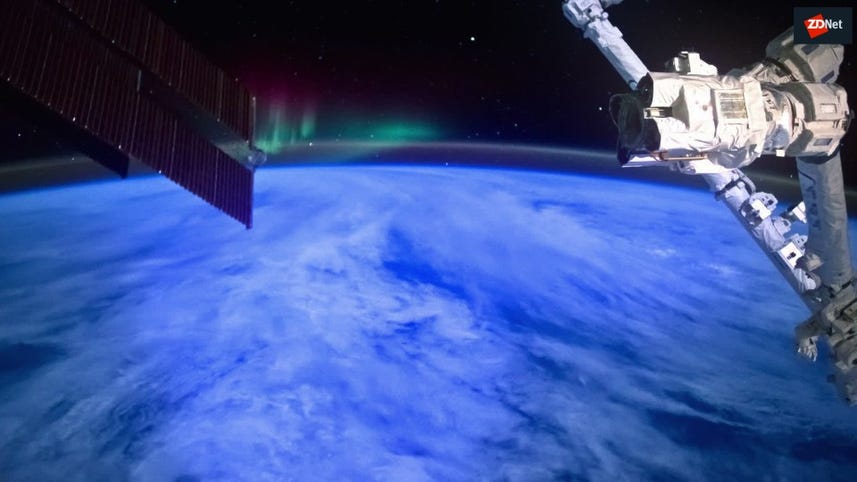 It's orbiting the Earth at 28,000 kilometres an hour, and is the most expensive structure ever built, but in some ways the International Space Station (ISS) is just like any other office, with laptops, printers and technology upgrades to worry about.

"Technology is part of everything we do and we couldn't do our mission without it, it's a critical need for us, so we are in a constant state of change in terms of how we infuse that technology to expand our capabilities," Stephen Hunter, manager ISS computer resources at NASA told ZDNet.

Hunter is responsible for everything on board the ISS, from the core avionics through to the devices used by the crew each day.

"We have a unique environment for our workspace, 240 miles above the Earth, but really it gets down to logistics and planning," he said.

A lot of that planning is much like any medium-sized business would do around a technology refresh, with a few additional challenges, like the need to have any new hardware delivered by rocket.

"Everyone can relate to having to do some kind of system upgrade, it's easy to spec it and go buy it, we just have a few more things we have to think about and the logistics are a little bit more intense and costly," he said.

Due to the huge cost of getting an object to the ISS, the team try to get maximum performance out of every piece of hardware. The station has around 100 laptops, as well as tablets and other devices, and aims to use each machine for around six years.

"We plan to use a device until it fails pretty much," says Hunter.

For laptops, the ISS tries to keep to a standard model which limits the number of spare parts that need to be carried onboard the station, and makes it easier for the crew to do basic repairs like change hard drives or batteries. If a laptop needs more repairs than that, it's usually not worth the time of the crew to try to fix it, although engineers from the ground can do some trouble-shooting for them.

The ISS also carries Apple iPads and Microsoft's Surface Pro tablets. "The research community usually has people that are die-hard iOS or Windows-based. They are both better at some things than others, so we try to make sure that we have the tools," he says.

Unlike in most offices though, the ISS has to generate its own electricity using its array of solar panels, and that means energy consumption is a key factor in choosing any new hardware.

"Everything wants power aboard the ISS and we only generate so much a day. You can only store so much in the batteries and you have to manage that across all the devices, so power becomes a challenge. It's not like I can just pull it out of the box, plug it into the wall and it will always be powered no matter what it is.

"It is a living, breathing ecosystem, this amazing thing that is up orbiting but to utilize it to its full potential you have to always have that thought process of 'How am I going to affect it if I deploy something?'," Hunter said.

For example, the ISS upgraded its printers this year, for the first time since 2000. While printers are used to print out emergency procedures in the event that networks go down, they are also a surprisingly important link to home for the astronauts on board.

"Just the tactile feel of paper can give someone the sense of home," said Hunter. "Letters from home, pictures that you can print out, there's all sorts of things that give you that sense of home when you are separated."

As well as the standard devices you'll find in most offices, the ISS is also experimenting with new technologies. The station was one of the first enterprise users of Microsoft's HoloLens, Hunter said, and he sees potential for augmented-reality tools that could help ground-based experts to walk the crew through complex tasks.

"They may have never seen this experiment but if you can get the ground-based systems expert that knows that experiment, or that even designed that experiment, they can walk the crew through it and the crew will be able to conduct that science," he said.

Another option is to use augmented reality as part of regular medical exams or during a medical emergency to give medics back on Earth a better view of the patient, or to help walk the crew through ISS maintenance.

"It's just a way to use technology to make the crew more efficient and effective during complex operations," Hunter said.

But Hunter said that one of the potentially most exciting technologies in the horizon is artificial intelligence. NASA is already using elements of AI in its projects and wants to use more in space exploration, where robotic spacecraft will often be out of communication with their human controllers.

Hunter also said AI could play a role in making sure that spacecraft can function effectively when they are so far out in space that the ground-based Mission Control won't be able to provide real-time guidance.

"We want to do proofs of concept on ISS for this, but if we are going to be successful as we transition to our lunar gateway project and as we transition onto Mars, just the whole concept of how we operate and how we compute things in managed systems will have to be very different," Hunter said.

"If you think about Mars, when you're in transition and when you actually make it to the surface of Mars, the communications round trip is 24 minutes, so we're going to have to design the systems in such at way that they're able to manage themselves and the use of technology is the thing that's going to drive that."

Hunter said that for these deep space projects, "every concept that we know today in how you do mission control is going to have to change" simply because of the distance. "You're going to have to have systems that are designed to be able to manage themselves. That's a challenge I'm excited about, in terms of how do we integrate AI to help manage systems as we go forward," he said.

"As we continue to mature the ISS and use it as a testbed for future exploration, it's [about] trying to test out those technologies, as we move on to things that have even more distance and danger as you move on to deeper space," he said.

From Windows 10, Linux, iPads, iPhones to HoloLens: The tech astronauts use on the ISS (TechRepublic)

The NASA official who looks after computers on the International Space Station on the role played by both Linux-based and Windows systems throughout the station's history.

Photos: From the IBM ThinkPad to the Apple iPad - the tech used on the ISS (TechRepublic)

This is the history of laptops used on board the ISS, since construction began in 1998, and a look at some of the newer tech finding its way on board.

The space agency says get ready for a "sonic thump."