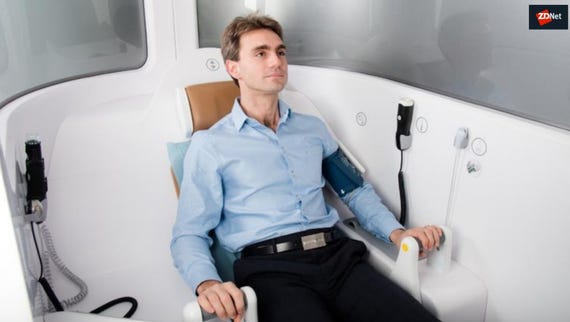 Doctor in a box: Telehealth cabins rolled out in France
Watch Now

About a decade ago, French doctor Franck Baudino was providing primary medical care to isolated communities in small African villages, which sometimes took two or three days' travel to reach.

Exhausted, and with demand for accurate healthcare consultations spiralling, he vowed to create a sustainable solution that could bring professional medical diagnoses to the global population.

AI that knows you're sick before you do: IBM's five-year plan to remake healthcare A mix of artificial intelligence and custom silicon could help people diagnose themselves with a range of conditions before they show symptoms.

"It wasn't possible to carry on like that," he tells ZDNet. "I wanted somehow to be able to take the pulse of the world."

CIA data shows that low-income countries have 10 times fewer physicians per capita than high-income countries. Nigeria has about four doctors per 10,000 people, while Ghana has only one per 10,000. By comparison, European countries, such as France have around 30, while the figure increases to 40 in Norway and Switzerland.

Yet even in developed countries such as France, there are plenty of areas where some of the population, particularly those in rural areas and the elderly, are left with inadequate access to healthcare.

The issue of 'medical deserts' in the countryside has long been a problem for the French government.

Having decided that it was important to find a way to provide remote consultations, Baudino founded H4D, or Health for Development, in 2008. Initially, he tested several devices, but the results left him dissatisfied.

"I realised that even with the best device you can't have consistent measurements because they depend so much on other factors, like the environment and design," he explains.

To put his plan back on track, he defined three essential elements for remote consultations. These were: quality of measurement, a sustainable point of care, and recreating an atmosphere of confidence.

A standalone telemedicine booth, which is 191cm long, 121cm wide, and weighs 285kg (6ft 3in, 4ft, 628lb), the Consult Station is a patented and certified Class IIa Medical Device, which meets the requirements of European Directive 93/42/EEC. Its white, clean design gives it the look of a hygienic, yet comfortable, hospital consultation room.

Inside, it offers professional medical instruments, screens, and a video system for communication with qualified doctors.

Guided by the doctor, a patient can use the equipment to perform a wide range of health checks, including measurement of vital signs such as blood pressure, pulse rate, blood oxygen level, height, weight, and temperature; using an electrocardiogram; listening to the heart and lungs with a stethoscope; testing the skin with a dermatoscope, and the eyes through a fundus camera. There are also visual and audio tests, and blood glucose-level monitoring.

"It works well, we've tested thousands of patients and 87 percent say they forget after three minutes that they're with a remote doctor," he says. "But one of our biggest challenges wasn't the technology. It was writing the clinical protocols with a core group of expert physicians, on how to guide a patient to use the devices."

When used properly, the range and quality of the devices inside the Consult Station allows a physician to treat 90 percent of common illnesses.

"We have to exclude areas such as emergency care, psychiatric problems, some stomach pain problems, and injections," he says. "By comparison, a physician by phone is able to effectively treat less than three percent of diseases."

Access to the booth requires secure patient authentication, so in France that means the carte Vitale health ID card is required. A prescription is delivered through the machine to the patient at the end of the consultation, and the data that is produced during the consultation is encrypted and accessed by the patient through a secure online database.

In France the Consult Station can be found all around the country, including the Paris, Provence, Saint-Etienne, and Toulouse areas. There are around 50 qualified physicians working across three platforms in Caen, Toulon, and Paris.

#WeAreNotWaiting: Diabetics are hacking their health, because traditional systems have failed them Diabetics have been waiting for years for better technology to manage their condition. Some got tired of waiting and hacked together an open source hardware and software solution. This is their story.

Every single doctor providing teleconsultations is a licensed practitioner in France either in a general family practice, clinic, or hospital, and they spend two to three half days working for H4D.

The booth can be positioned anywhere, such as a workplace, hospital, nursing home, or student residence. Baudino says he receives two to three calls a day from interested towns, cities, or departments in France.

At Sairenor, a retirement community for senior citizens in Le Clos Lamartine, halfway between Dijon and Lyon, the Consult Station has been supporting residents since 2014.

However, for now, the model works best for corporate clients, of which H4D has many in France, such as global construction player Vinci, insurance firm AXA, and Econocom.

"These companies want to promote quality of life for their employees, but in a cost-effective way," Baudino explains. "With the Consult Station their employees don't need to lose a day of work to see the doctor. They can have an appointment within 30 minutes and early intervention can prevent their condition from worsening."

For clients, the use of the booth and of the related services is available through a base monthly subscription of €3,000 per month. Individual consultations are then charged at the same rate as a standard consultation in France, which is currently €25.

H4D's biggest obstacle so far for deployment across France has been reimbursement. Currently the cost of a consultation is reimbursed to the patient by partner health insurance providers of H4D's clients. However, President Macron's government is set to change the healthcare law in 2018, as part of the annual revision process, which could result in teleconsultations being reimbursed through the national social-security system.

Over the past few years, the company has branched out into eight other countries with a similar corporate client business model, including Italy, the Philippines, the United Arab Emirates, Canada, and the US.

Cleared by the US Food and Drug Administration in March 2017, the Consult Station now meets all the requirements to be marketed in the US.

"The corporate business model is working so well that our main problem today is to absorb the growth of the company," he says. Despite this progress, Baudino still has his eye firmly fixed on helping communities in developing countries, with Consult Stations arriving in Gabon and the Ivory Coast in 2018.

"My dream is that one day people will forget that access to healthcare was a problem, so we can treat six billion people," he says.

Intel's Health Application Platform, paired with hardware from Flex, offers a way to remotely monitor patients without the challenges that come with tablet- or smartphone-based solutions.