After having read Bruce Lawson's article about the end of IE6, I thought it really is about time to learn something new and also to look forward to the next generation of Cascading Style Sheets, CSS3. 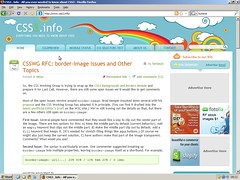 New browsers are ten-a-penny, and what with Microsoft jumping on the Web Standards Bandwagon, it looks like CSS3 will be useful sooner rather than later.

Another compelling reason to learn about CSS3 is that the jQuery JavaScript library works beautifully with CSS3 selectors. Though what with me being a web designer it's a bit of a no-brainer.