UAVs could help alleviate the pollination shortage that we face as bee populations decline.
Written by Kelly McSweeney, Contributor on Feb. 13, 2017 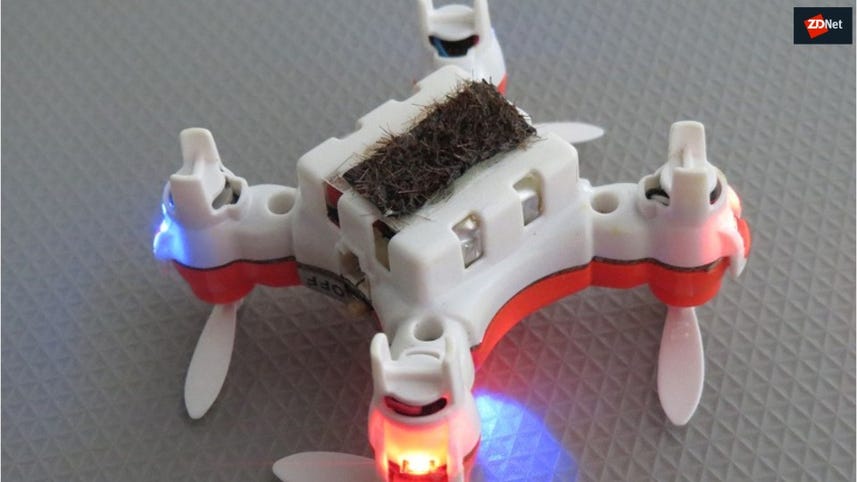 VIDEO: These tiny drones use gel on their hair to pollinate flowers

Japanese researchers are developing unmanned aerial vehicles (a.k.a. UAVs or drones) that can pollinate flowers to help assist the declining bee population.

A few years ago, using a flying robot to substitute a bee wouldn't have been worthwhile because a single bee can pollinate thousands of plants each day, and UAVs couldn't come close to matching that pace. But there have been several recent advances in swarm robotics. Now a single pilot can control many drones at once, so a swarm of robotic bees just might work.

This new swarm technology was showcased during the Super Bowl halftime show, where hundreds of Intel's drones provided a unique backdrop for Lady Gaga's performance. (Although due to regulations and weather, the drone portion had been pre-recorded.) Drone light shows are a nice way to showcase swarm tech, but it would be even better to use coordinated drones to solve the bee shortage, which is an environmental and agricultural crisis. Drones were named after bees, after all.

Honey bees pollinate a surprisingly large amount of the fruits and vegetables that we eat, adding up to billions of dollars in crop production. Bees are dying at alarming rates, and several species are now officially endangered. Most efforts to solve this problem involve saving the bees by limiting the use of pesticides and other chemicals, but this new approach focuses on helping the remaining bees by lightening their workload.

The key to the new bee-like robot is a special gel that it uses to pick up the pollen from plants. Eijiro Miyako, a chemist at Japan's National Institute of Advanced Industrial Science and Technology (AIST), was inspired to use an old ionic gel that he had stored after a failed experiment a decade ago. The gel is conductive and just sticky enough to pick up pollen.

So, Miyako and colleagues applied the gel to the bottom of an off-the-shelf $100 quadcopter. Rather than adding the gel to the drone's smooth plastic surface, they applied it to horse hairs that mimic bee fur. The gel-covered hairs provide maximum surface area for grabbing pollen and they generate an electric charge to keep the pollen in place.

In a research paper published in the journal Chem, the researchers described experiments where they used the hairy drones to take pollen from one flower and deposit it on another.

"The findings, which will have applications for agriculture and robotics, among others, could lead to the development of artificial pollinators and help counter the problems caused by declining honeybee populations," Miyako said in a press release. "We believe that robotic pollinators could be trained to learn pollination paths using global positioning systems and artificial intelligence."