Full Bio
Posted in Between the Lines on March 15, 2016 | Topic: Networking

We've all come to know and rely on traffic maps like the one below and mapping software like Google Maps to send us on the best route to where we want to go. 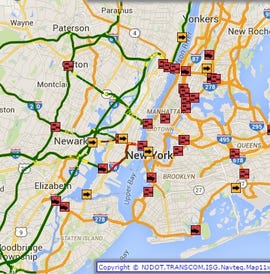 There's a surprisingly apt analogy to this for Internet traffic. If you're a service provider on the Internet and you need to maintain a certain level of performance for your users; you need to know where there are accidents, traffic congestion, construction. Basically, where are the fastest routes between you and your users?

Dyn (pronounced "dine") provides this sort of "Internet Intelligence" information. The company has sensors and reporting systems on ISPs, hosts, CDNs and cloud providers all over the world. These actively report back to Dyn on availability (the ability to connect to the resource from around the world), performance (measurement of latency) and market reachability (the ability to communicate from the resource to the outside world).

If your customers in Berlin are experiencing performance problems with your service it could be an issue at a local ISP or CDN you are using. It could be a more general problem in Berlin. It could be a lot of things. You can then use Dyn's information on where the problems actually are to direct your traffic through alternatives until the trouble passes.

Obviously such problems occur all the time, some from mistakes, some from equipment failure, some from malicious action like a DDOS. In all cases, the first action to take is to route around the problem. Very often, existing services and practices use geolocation and hops as a proxy for latency in order to determine best route. But what if you actually had the latency numbers? That would be much more accurate, and Dyn gets those numbers. There are many other measurements of performance and quality, such as bit loss in Internet routing.

The second thing you do is to identify the true source of the problem, or at least as close to it as you can get. Even if your information is only as coarse as "Level 3 in Boston" you have enough to avoid and report the problem. But often you can get much more precise, which allows you to be more precise and less disruptive in routing around the problem.

If you are a large enough site you will have load balancing between providers along the way, so you could make this adjustment by changing the priorities of the load balancing. At a lower level, you might be able to make a change just by changing DNS addresses for servers being affected to those which are not. You may even find out, through an alert from Dyn, before your users complain.

This is all live data, not collected from clearinghouses as some other services do. This means they need an actual presence on systems all over the world. In some cases they say they need to measure performance at an IXP (Internet Exchange Point) but no further. Because of their extensive worldwide reach they can see problems, like route hijacking, that are invisible to most entities.

Of course Dyn also offers managed DNS and traffic management services to utilize this intelligence. Old-timers like me remember Dyn as a DNS service, and I was a small-time paying customer of theirs many years ago. They discontinued their free host-name service in 2014.

Dyn has many competitors in various markets such as managed DNS, managed security services and traffic management. For the sort of world-wide intelligence described here, ThousandEyes has similar offerings. I haven't compared them. At this point, the market's more than big enough for the both of them.

I asked Dyn about pricing and they declined to answer the question directly. Pricing for a service like this is likely to be complicated and not cheap, but at a certain point your business is big enough and your Internet services crucial enough that you need this kind of intelligence in order to keep your systems running as best they can as much as possible. Are you an Internet service offering an SLA (Service-Level Agreement) to your customers? You need this kind of intelligence.