Facebook is known for creating evolutionary software to keep up with its ever-growing userbase, and then giving away the recipe for developers to play with.

Their latest is called Tornado. It's the framework that Friendfeed was built on. It focuses on real-time web services, namely connections that need to be open all the time. And it can handle a ton of connections. Tornado is written in Python too, a language that has recently taken off amongst web developers. 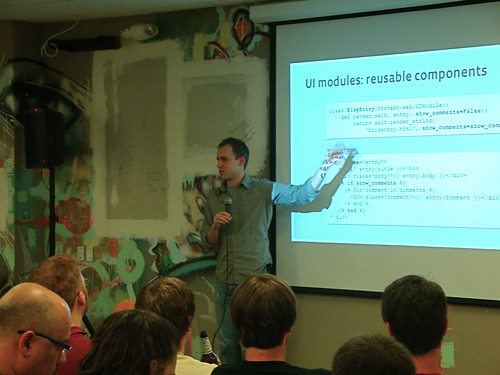 Last night at the Facebook offices here in Palo Alto, Bret Taylor and David Recordon explained the technology behind Tornado.

Besides open-sourcing an awesome product that will benefit the rest of the web, the Friendfeed guys hinted that they might be upgrading Facebook Chat.

I'm excited to see Tornado in action on Facebook. Even when you update your status or want to see new posts on the home page, it takes a second or two. This is unacceptable. As time moves forward, and the web becomes more interactive and personal, those extra milliseconds will add up, and they will carry more weight. It's nice to see Facebook leading the charge on this.