AMD hopes to challenge Intel's Atom-based dominance of the netbook market by combining a low-power CPU with the equivalent of last year's discrete graphics card in a single package. Toshiba is using the 1GHz C-50 in its new high-end netbook, the NB550D mini, which comes in a sturdy little 1.3kg case in a choice of blue, green, brown or black.

The metallic colours and slightly rubberised cover embossed with dots, the matching buttons on the trackpad and the line of colour around the Harman Kardon speakers make for a more stylish look than many netbooks. The sound from the speakers is excellent, with enough volume for video calls or watching movies and audio quality that makes it a pleasure to listen to music. The placement of the speakers is a little odd; they're set into the palm rest, and the offset placement of the trackpad means your left hand is resting on a speaker as you type; it's not uncomfortable, but we wonder if they'll get clogged with crumbs over time. 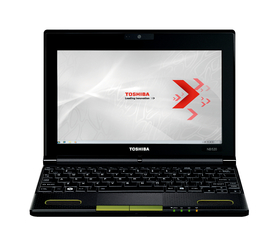 The Harman Kardon speakers look and sound good, but the netbook format is a compromise, even with AMD's C-50 processor.

Otherwise this is a typical netbook layout, with a 10.1in. screen at 1,024 by 600 resolution and the usual small keyboard; the keys take up the full width of the case, but are still on the small side (especially some of the secondary keys). As usual, if you have larger hands you may find the typing area a little cramped. The trackpad is also small, with a very pronounced texture on the surface; it's accurate and responsive, but too small for all but the simplest gestures. Ports are basic, with USB 2 rather than the faster (and still premium) USB 3 spec and Fast Ethernet rather than a Gigabit port (we've seen both on Asus netbooks recently), although it's nice to get the choice of VGA or HDMI. One of the ports has the increasingly common 'sleep charge' option that lets you charge a phone or other USB device even when the netbook is off. But the real difference is the processor — and the graphics.

At 1GHz, AMD's dual-core CPU actually has a slightly slower clock speed than either single- or dual-core Atoms and it doesn't have hyperthreading. However, in general use it still feels slightly faster than an Atom, and we found it less painful to be running multiple applications at once. And the GPU built into the C-50 is in a different class from Intel's integrated graphics in Atom-based netbooks. This doesn't just help with playing video, although 720p video playback was better than most netbooks (it's not up to streaming 1080p video from YouTube — it didn't freeze, but it didn't quite manage the full frame rate either). Many Atom netbooks have the Broadcom HD accelerator, which improves video playback by offloading video decoding; the C-50 has an ATI GPU that can do full hardware acceleration in browsers like IE 9 and Chrome (or any other GPU-accelerated software). As GPU acceleration becomes more common and more web apps take advantage of it in browsers, the AMD chip can deliver better-than-netbook performance, but at netbook prices (the NB550D costs £280).

Standard netbook features like Windows 7 Starter and a slow hard drive do slightly cramp the C-50's performance, but the battery life is excellent for a netbook this light — something the GPU also helps with, as for some tasks it's more power-efficient than the CPU. Toshiba says the 8-cell battery can deliver up to 9.5 hours. We saw a full 6 hours with Wi-Fi on, running a mix of productivity and multimedia tasks; turning off Wi-Fi and turning on more power-saving options should give you rather more. That's impressive for a netbook at this price, especially as the AMD chip does give it a performance bump — particularly for web apps.

There are plenty of AMD netbooks on the way from various manufacturers. Apart from the excellent audio, what Toshiba has to offer is the build quality and the usual comprehensive utilities (although most businesses will want to upgrade the one year 'pick up and return' warranty). Netbooks aren't ideal as business notebooks because you have to make so many compromises for the portability, but the NB550D mini is an interesting new twist on the format.