Netbooks are here to stay, says Toshiba, accounting for 15-20% of all their notebook sales – but those who want something ultraportable with a bit more power, it’s introducing the Satellite Pro T110. A year ago the cheapest ultraportables were around £1,000; the T110 weighs in at 1.58kg with an 11.6” screen and a 7 hour battery life for just £449 with 64-bit Windows 7 Professional. It also has a multi-touch touchpad for zooming and swiping, an HDMI connector and USB ports that can charge your phone or music player even when the PC is off (as long as it’s plugged in, so you can leave one charger at home). There are netbooks more expensive than this. 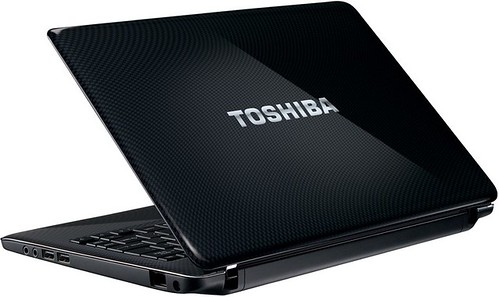 This is a machine aimed at Toshiba’s heartland in the business market as well as more demanding consumers, rather than the executives who warrant what Toshiba’s Mark Finkel calls the ”aspirational” R series machines. “Netbooks are good,” says Finkel, “but you do hit a performance wall with the Atom processor; you can only do so much. This is for people who need more but either don’t have the budget or don’t need features like vPro.”

Last year there were versions of the Satellite T110 with Pentium or Celeron Single Core CULV processors (although the slower processors give you up to 9 hours battery life); now there’s a Satellite Pro model with a Core 2 Solo CPU. Will there be a Dual Core version? “Watch this space”, says Finkel; “at some point but we have to see what the market wants”.

The Core 2 Solo delivers better performance than Toshiba’s NB300 on MobileMark benchmarks: Toshiba says it scores 92 rather than 61 – though the R600 is still a much more capable machine, delivering 188 (and packing what Toshiba claims is the world’s thinnest optical drive; none of the T110s have optical drives, though arguably few users will miss them these days).

The case of the T110 tapers from 30mm to just 22mm thick; netbooks are usually 35-40mm. And even in the thinner chassis, the T110 is more rugged than most netbooks. The screen is rubber mounted to withstand shock and there’s shock protection on the hard drive, including a 3D accelerometer (we dropped it off the table and clearly heard the hard drive park itself – and yes, it carried on working afterwards). Toshiba claims its tests simulate 5 years of usage and the motherboard doesn’t run all the way to the edge of the chassis, so even if you crack the case the T110 should keep working. Across its entire range Toshiba is claiming failure rates of only 2% a year, which is about half the industry average.

The T110 gets the usual range of Toshiba utilities, which are increasingly useful; the Life Space and Reel Time visual document management tools we looked at on the Tecrra S11, a PC Health tool that warns you if your battery is holding less charge than it used to and an Eco Utility that makes the power options already in Windows 7 rather clearer and can help you eke out your battery by dimming the screen, turning off all the LED indicators and clocking the processor down to 30 or 40W. That saves about 20% on power consumption but you can still watch HD video without skipping frames or seeing artefacts. 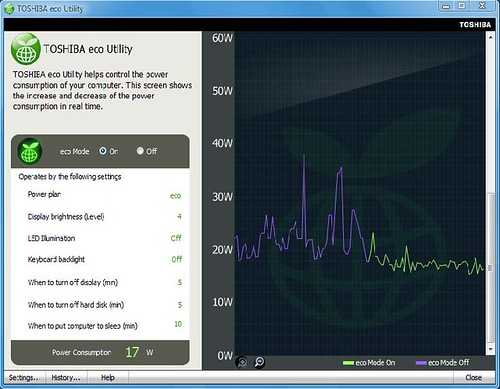 This is a refresh of the existing Satellite T110 models that keeps pushing down the cost of portability in a way that was unthinkable even a year ago. But remember you’re choosing between a bit more power and a bit more battery life.