They're only any good at protecting your stuff against an honest person.
Written by Adrian Kingsley-Hughes, Contributing Writer on April 1, 2021 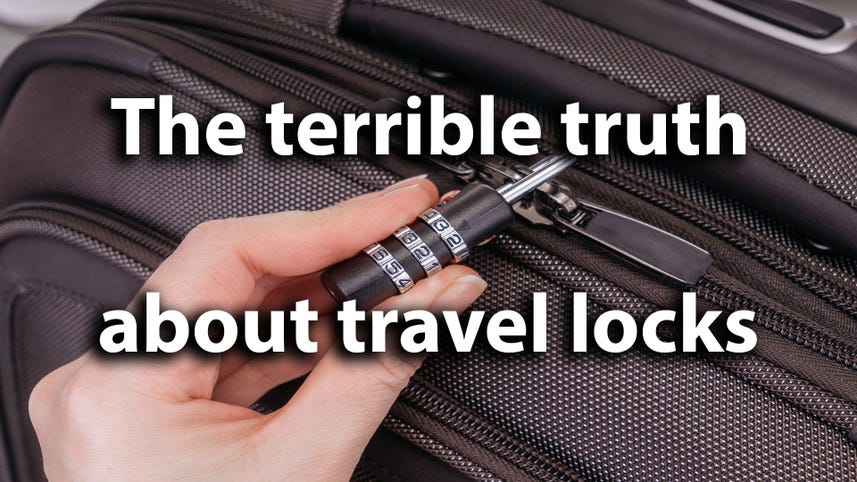 It's the seasons where people start thinking about travel again, whether that be business or pleasure. And after a year of COVID-19 lockdowns, stay-at-home orders, and travel restrictions, people are a bit rusty when it comes to traveling.

One aspect of travel I've had a fair few questions about over the past few weeks is travel locks. You know, the little padlocks that you use to secure the zipper on a suitcase, or perhaps it's built into the latch of the case.

They come in all shapes and sizes.

I mean, these look beefy, have that official TSA logo on them, and the keys look pretty serious.

They look like the kind of thing you can trust, right?

They're only any good at protecting your stuff against an honest person.

First off, when the TSA introduced the system of travel locks where it held a set of master keys to the locks, allowing officials to open them for inspection without breaking the lock, the bar for security was lowered dramatically. The locks offer dubious levels of security. A person semi-experienced in lock picking can open them in seconds (I can open most in a few seconds).

To make matters worse, the companies making these locks cut corners, so the locks themselves are vulnerable to a multitude of semi-skilled attacks. For example, combination locks manufactured with poor tolerances so they can be opened by feel.

Another problem is that some manufacturers offer keys for their locks. While they differ from TSA's own master keys, there aren't a huge number in circulations, so a determined criminal can spend a few dollars on a selection of travel locks and get a near-complete set.

And the icing on the cake was that the TSA's own master keys escaped into the wild years ago, meaning that copies are everywhere -- or at least in the hands of people who shouldn't have them.

There are TSA locks out there that feature an indicator to show if the lock has been opened using a master key, but based on my experience or testing these locks, this indicator is easily bypassed.

On top of that, there is a myriad of ways to get into bags and suitcases (most without leaving a sign), from forcing the zipper to popping the hinge open.

Bottom line, we're back to that honest person thing.

Firstly, I still recommend you lock your luggage. Even the second or two it might take an attacker to open the lock makes your luggage less enticing than an unprotected bag or suitcase. They also stop the zip or latch from coming open on you unexpectedly.

I also augment the lock with some other indicator that would show if my bad has been tampered with. Perhaps some thread around the zipper pulls, or a bit of paper between the seals of the case. Something that will alert me if the item has been opened.

Secondly, I like to make my bags distinctive -- stickers, reflective tape, that sort of stuff -- because that makes them less anonymous and harder for a would-be criminal to make the excuse that it looked like their bag.

Thirdly, when I'm not going through airports, I put better locks on my bags. I'm a fan of ABUS locks. They can still be opened by someone skilled and determined, but it'll take more time, and again that makes your luggage less enticing to criminals.

Also, keep your valuables on you or near you. If you want to take your laptop or camera with you, then be ready to haul it around with you.

I'm a big fan of having Tile tags on things that might be lost or stolen like keys, wallets, and bags.

Then there's insurance. Yup, no matter what precautions you take, you can still lose things, and one thing that I feel helps prevent lost sleep is to have adequate cover for my gear.

So, there you have it. The ugly truth about travel locks.

Transportation
Sony LinkBuds S review: The magic is in the software