Former President Donald Trump has filed three lawsuits in Florida courts against Facebook, Google and Twitter as well as each company's CEO, asking judges to effectively overrule Section 230 of the Communications Decency Act. For years, Section 230 has been used to protect websites from lawsuits by not making them liable for what users post or what they takedown.

The lawsuits claim that the companies allegedly violated Trump's First Amendment rights when they banned him from their social media platforms earlier this year following an attack on Congress by his heavily-armed followers.

Although each is a private company, the lawsuits contend that due to their size and work with the Center for Disease Control during the COVID-19 pandemic, the companies rise "beyond that of a private company to that of a state actor." A lawsuit was filed against Google because it owns YouTube, which also banned Trump following the attack on the Capitol Building in January.

Trump announced the lawsuits during a press conference at his golf course in New Jersey and immediately began fundraising heavily following the event.

The lawsuits faced harsh criticism from legal experts who found a litany of mistakes in the filings and said they were not likely to get far in court.

Kenesa Ahmad, a lawyer and partner at consulting firm Aleada, said the lawsuit was particularly strange coming from conservative leaders who, over the years, have repeatedly argued that companies should "have the right to refuse service to anyone."

"Conservative legal theory has established the ability to deny service to people for not wearing shoes, for not baking a cake for two men marrying, or even to restrict access to golf clubs on the basis of race," Ahmad said.

"Yet the former President is complaining about a private company denying him a platform he used to foment violence and an attempted coup? The courts have long spoken on this."

Over the years courts have routinely ruled in favor of protecting Section 230, and technologists often call the rule the "backbone" of the internet.

Anurag Lal, CEO of NetSfere and the former director of the US National Broadband Task Force for the FCC under the Obama administration, said platforms like Facebook, Twitter and YouTube have made it clear that they are within their full rights to deny a user if terms of use are broken.

"From a business perspective, I don't believe this lawsuit will be successful. Because users opt-in when they sign up, you cannot force a company to counter these rules and regulations. In this instance, former President Trump did break those rules and now is dealing with the consequences of those actions," Lal said.

Evan Greer, director of advocacy group Fight For The Future, called the lawsuits a "fundraising grift" and explained that the First Amendment enables private platforms to make the kind of moderation decisions they wish to make as non-government entities.

Greer said it was disingenuous for Trump to attack Section 230 because without the rule, platforms "would likely have removed controversial figures like Trump long ago."

"Tech companies make content moderation decisions out of self-preservation, not principle -- with the result being that people with more power have outsized influence over moderation decisions. While the former President's ban from social media may have removed the man himself, it hasn't changed the social media dynamics that helped him get there in the first place." 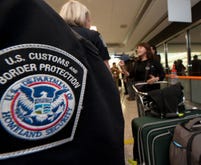 Trump administration toughens social media screening for US visa applicants The new questionnaire for visa applicants was approved last month and is now in effect.
Show Comments
LOG IN TO COMMENT
| Community Guidelines