Twitter's chief operating officer Ali Rowghani is leaving the company, he announced in a tweet on Thursday.

It comes a day after Recode reported that the microblogging site was mulling a reshuffle of its top executives — including Rowghani.

According to an 8-K filing with the U.S. Securities and Exchange Commission (SEC), Rowghani resigned from the company after four years at the company. He will remain an employee at the company and serve as a strategic advisor to chief executive Dick Costolo. 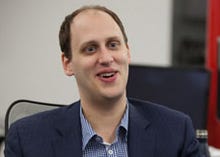 As a result of his departure, Twitter said it "does not intend to hire a replacement for the COO role," and his duties will be absorbed by the remaining executive team.

It's not immediately clear if any other executives have been shuffled amid the departure.

Costolo said in a follow-up tweet that the company "could not have succeeded without [him]."

The report from Wednesday said Twitter's lackluster growth and product innovation was one of the driving factors behind the company's bid to shuffle its executive deck.

Rowghani departs after eight months following Twitter's bid to seek an initial public offering on the New York Stock Exchange. At the time, the microblogging service had 218.3 million users on average per month. But it was losing money. In its fiscal first-quarter earnings in April, Twitter reported a net loss of $132 million, or 23 cents per share.

To make matters worse for the former chief operating officer, the company had only picked up 14 million more monthly active users in the three-month period. Analysts were expecting a higher figure, but Twitter failed to deliver.

Twitter declined to comment to Recode on Wednesday, but we have reached out to the company for more.

Twitter ($TWTR) fell in pre-market trading by 1.4 percent on Thursday, but stabilized out in early active trading.