Seven weeks after it was announced , Canonical has released images and open source code for the Developer Preview of the Ubuntu Touch OS, currently destined for Nexus smartphones and tablets.

The preview release offers the usual mobile features, such as phone calls, GSM, Wi-Fi and SMS support, but the Ubuntu project warns that the version is not ready for consumers:

"We recommend to install the Touch Developer Preview only if you are a developer or enthusiast who wants to test or contribute to the platform. It is not intended to replace production devices or the tablet or handset you use every day." 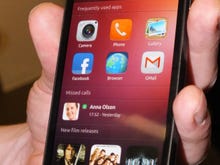 Supported devices include the Galaxy Nexus and Nexus 4 smartphones as well as the Nexus 7 and Nexus 10 tablets. Ubuntu's installation instruction page provides links to the factory firmware images from Google to restore Android.

The release notes provide a few good reasons for Canonical to stress that the preview OS should not be used as a primary device's OS.

The Touch Preview supports Wi-Fi but not some 3G and 4G networks, such as CDMA and LTE, while the OS may destabilise the device's features, according to the notes. The Nexus 4, for example, may "not be able to boot at all" after the battery is drained, with the only resolution to pop the back off and unplug/plug in the battery connector. Using the camera application on the Nexus 10 could also cause issues with audio controls, and the Nexus 7 runs in portrait mode by default.

SMS is supported, but unstable and the OS does not include support for emergency calls without a SIM, PIN/PUK for locked SIMs, or the speakerphone.

The apps that come as part of the release include gallery, phone dialler, SMS and address book, front and back camera, browser, media player and notepad.

User interface features the OS brings to the touch devices include: