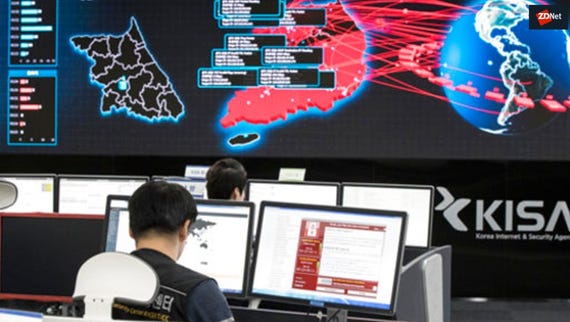 Cyberattacks: Finding the culprit is now harder than ever
Watch Now

Cyberattacks: Finding the culprit is now harder than ever

Russian cybercriminals have targeted the UK in 49 separate incidents over the last six months, the home secretary has revealed.

Speaking at the National Cyber Security Centre's CYBERUK conference in Manchester, Amber Rudd said there's been "a significant increase in the scale and severity of malicious cyber activity globally" but said that the government "will not tolerate this".

The Home Secretary also announced a crackdown on the dark web, fronted by increased resources in the fight against hackers and other criminals who operate on underground forums - although some have questioned if a few million pounds are enough to make a difference.

But, in addition to crime gangs, Rudd warned that nation-states are also eager to use the internet to cause as much destruction and disruption as possible.

"We know that there are several established capable states seeking to exploit computer communications networks to gather intelligence, personal information, and intellectual property from the government, military, industrial and economic targets to advance their strategic goals," she said.

"Hostile states, groups of individuals are using cyber-tools to commit crimes, to project power, to intimidate their adversaries, and to influence and manipulate societies in a manner which makes definitive attribution difficult."

However, when it is possible to identify the perpetrators, the Home Office is clear that it will call the activity out -- especially as the number of attempted attacks rises.

"The threat is not diminishing; over the past six months, the NCSC has responded to 49 incidents associated with Russian cybergroups, some of which have hundreds of potential victims. Russian actors have systematically targeted the UK amongst others, expanding the number of sectors targeted in addition to the energy, telecoms and media sectors," said Rudd.

In addition to attacks against industry, Rudd once again pointed the finger at Russian backed cyber groups for attempts at election meddling and for the NotPetya cyberattack.

"We have started to call this activity out. We called out Russia for meddling in elections. We called out Russia again for the destructive NotPetya cyber-attack of 2017," she said, before going onto once again call out North Korea's involvement in the WannaCry ransomware cyberattack, describing it as "the most significant to hit the UK in terms of scale and disruption," particularly given the impact it had on the National Health Service.

In order to boost the effectiveness of the UK's response to cyber-attacks, the home secretary revealed that the first ever nationwide cyber-response exercises are set to take place -- although there were no details on when this will be, what will be involved, or which bodies will be taking part.

"It's right that we take all the steps we can to learn, improve and test our ability to respond to a national cyber-crisis," said Rudd.

"Today I'm pleased to announce we will be running the UK's first live national cybercrime exercise to test the response of our security and intelligence agencies, police, and first responders in the event of a large scale cyber-incident."

Join Discussion for: UK hit by 49 cyberattacks from Russian groups...