You can now use bitcoin and ether to donate to the global agency focused on children's rights.
Written by Asha Barbaschow on Oct. 9, 2019 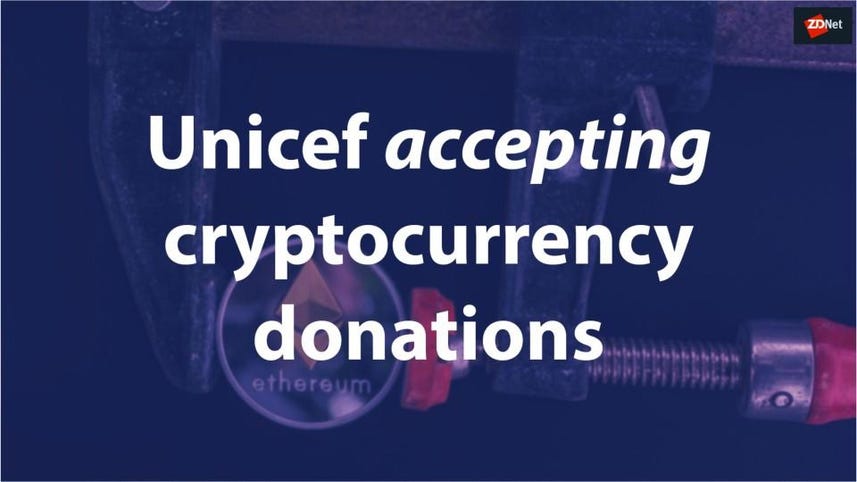 Unicef has announced a new way to donate, with the organisation now accepting cryptocurrency.

The newly-established Unicef Cryptocurrency Fund will allow it to receive, hold, and disburse donations of ether and bitcoin.

Unicef is a global humanitarian and development agency focused on children's rights. Although it is the United Nations Children's Fund, Unicef is not funded by the UN; rather, it provides assistance from voluntary donations.

Unicef said it will use cryptocurrencies to fund open source technology to benefit children and young people around the world.

"This is a new and exciting venture for Unicef," Unicef executive director Henrietta Fore said. "If digital economies and currencies have the potential to shape the lives of coming generations, it is important that we explore the opportunities they offer. That's why the creation of our Cryptocurrency Fund is a significant and welcome step forward in humanitarian and development work."

The Ethereum Foundation, a Swiss non-profit, which launched its software platform as a crowd funded initiative in late 2014, will make the first contributions to the fund.

"The Ethereum Foundation is excited to demonstrate the power of what Ethereum and blockchain technology can do for communities around the world. Together with Unicef, we're taking action with the Cryptofund to improve access to basic needs, rights, and resources," executive director of the Ethereum Foundation Aya Miyaguchi said.

"We aim to support the research and development of the Ethereum platform, and to grow the community of those that benefit from a technology that will better countless lives and industries in the years to come."

The donation from the Ethereum Foundation will benefit three grantees of the Unicef Innovation Fund, as well as a project coordinated by the GIGA initiative to connect schools across the world to the internet.

Unicef announced in February that six companies were given seed funding from its Innovation Fund: Atix Labs from Argentina; OS City from Mexico; also from Mexico, Precrypto; India's StaTwig; W3 Engineers from Bangladesh; and Tunisia-based Utopixar.

The companies are all blockchain startups and will receive support from Unicef's innovation team for another four months.

See also: Cryptocurrency 101: What every business needs to know

The Ethereum Foundation will make its initial donation through the French National Committee for Unicef. Unicef national committees of the United States, Australia, and New Zealand also accept cryptocurrency, the organisation said.

When on The Hopepage, an individual's browser uses the computer's processor to solve cryptocurrency algorithms -- users can select how much processor power they want to donate to the task.

The longer the browser is open, the more processor power is donated, which means more algorithms get solved to earn cryptocurrency.

The cryptocurrency is then automatically donated to Unicef Australia and is turned into real funds that the organisation has said is used to provide children with supplies such as safe water, therapeutic food, and vaccines.