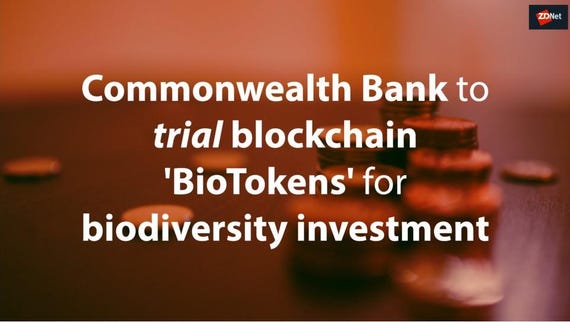 The Commonwealth Bank of Australia (CBA) is continuing its focus on blockchain technology, this time announcing a prototype it believes has the potential to boost sustainable development while enabling investment opportunities for landowners, environmental groups, developers, and government.

Developed by CBA, alongside BioDiversity Solutions Australia (BDS), the prototype enables the creation of tradeable digital tokens -- BioTokens -- within an "efficient and transparent digital marketplace powered by blockchain".

"Our vision is that by digitising biodiversity credits and building a marketplace where they can be bought and sold, we can invest in and protect our natural environments."

According to BDS managing director Rod Barnaby, the organisation came up with the concept of a biodiversity credit marketplace through a desire to better understand the challenges and potential benefits of the Biodiversity Offset Scheme, which was in 2017 expanded by the Australian government.

The framework requires developers to find and purchase biodiversity credits to offset development impacts. The credits can be generated by landholders establishing stewardship sites to protect biodiversity on their land in perpetuity.

Currently, there is no transparent marketplace for developers and landholders to trade biodiversity credits, but the prototype digital marketplace for trading BioTokens, CBA said, provides a platform.

"Our vision is that by digitising biodiversity credits and building a marketplace where they can be bought and sold, we can invest in and protect our natural environments," Gilder added.

"Creating a transparent, accessible, secure, and liquid market place for the creation and trading of biocredits, aligns with our strategic focus on sustainability, support for regional economies and exploration of emerging technologies to deliver tangible benefits to our customers."

Gilder said CBA sees future possibilities to extend the BioTokens concept to the management and allocation of other scarce resources, such as intellectual property or water rights.

The BioTokens play follows the bank in August announcing the completion of the world's first bond delivered via blockchain, on behalf of its client, the World Bank.

It also previously tracked the shipment of almonds from Australia to Germany on a blockchain.

The blockchain platform, underpinned by distributed ledger technology, smart contracts, and the Internet of Things, was used to facilitate the trade experiment that saw 17 tonnes of almonds sent from Sunraysia in Victoria, Australia, to Hamburg in Germany.

CBA also recently announced a partnership with CSIRO's Data61 that sees the pair help manage payments within Australia's National Disability Insurance Scheme (NDIS) by using a permissioned Ethereum network with smart contracts that control when and where money from the government can be spent.

This followed Data61 partnering with law firm Herbert Smith Freehills and IBM to build a blockchain-based smart legal contracts network, the Australian National Blockchain (ANB), touted as enabling organisations to digitally manage the lifecycle of a contract, from negotiation through to signing, and continuing over the term of the agreement.

The three banks have partnered with IBM for Lygon, which is touted as having the potential to reduce the time it takes to issue a bank guarantee from up to a month to on or around the same day.

Lygon leverages the IBM Blockchain Platform, which is built on top of Hyperledger Fabric, an open source blockchain project from the Linux Foundation.

The Australian government's Digital Transformation Agency (DTA) recently gave advice to those getting lost in the buzz of blockchain.