By Stephanie Condon for Between the Lines | May 8, 2016 | Topic: Innovation 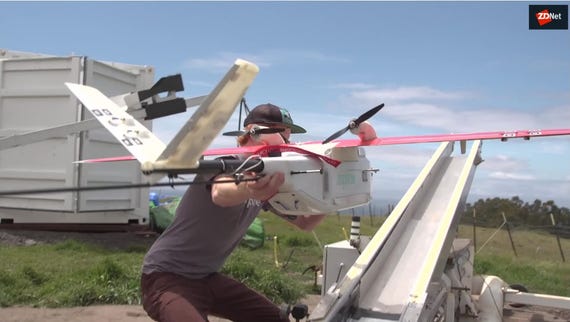 Crowded airspace and complicated regulations have so far stalled drone deliveries in the United States, but in Rwanda -- where the flight paths are clearer and the red tape a little thinner -- drones are ready for takeoff courtesy of a partnership between UPS, Zipline and Gavi.

The Rwandan government has signed a deal with the California-based robotics company Zipline to make its country the first ever to use a drone delivery system on a national scale. Zipline is partnering with the UPS Foundation and Gavi, the nonprofit vaccine alliance, to execute its plan to make up to 150 drone deliveries per day of live-saving blood to 21 health facilities across a broad swath of the western portion of Rwanda.

The plan combines Zipline's resilient drone design with the supply chain expertise of UPS and Gavi's experience delivering vaccines to all parts of the world. The deliveries are promised to make it to the designated health facilities in around 30 minutes -- orders of magnitude faster than it takes now. Given that 95 percent of roads in Africa wash out annually, relying on automobiles to make time-sensitive deliveries of live-saving supplies doesn't cut it.

"There's an opportunity for countries like... Rwanda to leapfrog the absence of roads and deliver medicine" quickly and efficiently, Zipline CEO Keller Rinaudo told reporters last week. "Jungles, mountains in the way... none of those are a challenge."

"Improving access to medicine and medical products in remote regions... is a global problem," he said. Zipline, he said, intends to "address that problem at a global scale."

From a business standpoint, emerging markets like Rwanda serve as an interesting test bed for commerce, logistics and technology. Why? There is no existing infrastructure or regulation to disrupt or stymie new technologies from being used. It is quite possible that the partnership between UPS and Zipline could yield expertise and processes that could be used in developed markets for business.

Zipline -- which is funded by Sequoia Capital, Google Ventures, Paul Allen, Jerry Yang, and Stanford University -- has other government partnerships that have yet to be announced.

In the meantime, deliveries in Rwanda are slated to begin in July. The UPS Foundation is contributing an $800,000 grant to support the project's initial launch, while also serving as a consultative resource for Zipline.

Here's a look at the Rwanda delivery sites:

"We're a company of trucks and warehouses and people," said Ed Martinez, president of the UPS Foundation. "If you have a resilient... supply chain, you're going to save lives."

The drone network will initially focus on carrying blood supplies. Eventually, the drones will carry vaccines, treatments for HIV/AIDS, malaria, tuberculosis, and many other lifesaving medicines.

Dr. Seth Berkley, the CEO of Gavi, explained how useful the drone deliveries could be for distributing drugs like the rabies vaccine -- which is hard to store in poor, rural areas because it's expensive and must be kept cold. Rabies is 100 percent lethal unless the vaccine is administered quickly enough after the disease is contracted. About 60,000 people die from rabies each year, usually after being bitten by a rabid dog.

"The challenge with rabies is that you don't know when somebody is going to get bit by a rabid dog," Berkley said. "This is really a life saving technology... an elegant solution to a difficult problem."

Zipline, a team of 25 aerospace and robotics engineers, designs every component of its fixed-wing drone from scratch. "The importance of owning the whole stack is we can ensure the whole system is safe," Rinaudo said.

The vehicle -- called a zip -- weighs about 10 kilograms and carries a payload of 1.5 kg. While working with quad copters would have been easier, they have a limited range and tend to fall out of the sky if conditions aren't perfect.

"We needed to design a system that had 20 times the range [of a quad copter]... that could operate in extreme wind and rain," Rinaudo said.

The aircraft has a round-trip range of about 75 miles and sends data back to its hub once a second. Flights are monitored on the ground with tablets, but a zip's entire mission, including the delivery and return home, is pre-programmed. If it lost communication with its hub, it could still successfully make the delivery and make the return trip.

The only tool that health care workers at the designated facilities need is a cell phone. They can send a text to one of Zipline's distribution hubs, requesting a delivery. After that, they can expect a text back acknowledging the order was received, as well as a second text once it's about to arrive.

"There's a reason we named the company Zipline," Rinaudo said. "It's basically like a railroad in the sky. The beautiful thing about logistics is it's actually very boring."

Competing against motorcycles, not Google

The government of Rwanda will be keeping track of various metrics, and Zipline will, of course, want to demonstrate that it can improve access to necessary blood deliveries and vaccines. It also wants to ensure that it's cost effective. Its system is already at economic parity with motorcycles, and Rinaudo said it should be an order of magnitude more effective in five or 10 years.

"The reality is our competitors are motorcycles," he said, brushing off the notion that other tech companies working on drone delivery services are Zipline's competitors.

Asked about efforts like Google's Project Wing initiative, Rinaudo declined to comment on any specific project. He simply said, "I have yet to see a lot of great products come out of corporate incubators."

Once again touting the zip's resiliency, he pointed out that earlier this year, DHL had to cancel a demonstration of its tilt-wing drone delivery system at the last minute because of poor weather.

Related: Facebook's internet drone close to taking flight | Every enterprise needs a drone strategy | This is how Google drones will deliver your packages, and keep your pets safe | Who's going to fly those Amazon delivery drones? | Amazon gives us a sneak peek of new Prime Air delivery drone

All that said, Zipline does consider the zip's landing function a trade secret and a competitive advantage.

Rinaudo has a clear vision for expanding Zipline. Zips could be deployed fairly easily to emergency situations, given that the distribution centers are simply modified shipping containers. "You can think of this as an entire supply chain you can deploy anywhere in the world in 24 hours," he said.

And while the Rwanda's zips will take deliveries to designated health centers, Rinaudo expects that could change as well -- once smartphones equipped with GPS are more ubiquitous, deliveries could go just about anywhere.

Zipline's ultimate goal is to create an "instant global delivery system," but for now they're focusing on medical deliveries -- fulfilling a need that exists around all parts of the globe, including parts of the U.S. So while the FAA works on drone regulations for U.S. airspace, Zipline is working on building up its flight logs.