US, China or Europe? Here's who is really winning the global race for AI

A new report shows that in the ever-more competitive race for AI, the US has a strong lead that China is catching up with, while the EU is falling behind little by little.
Written by Daphne Leprince-Ringuet on Jan. 29, 2021 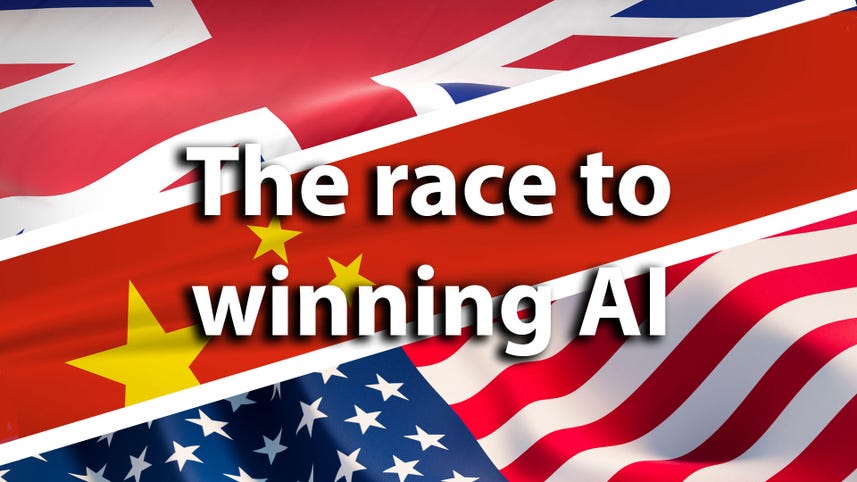 Investment is pouring into AI-related companies around the world, and every week sees another collection of papers published about all manner of algorithmic matters from scientists at top-notch research institutes. It is a well-established fact that an international AI race is on – but the question is, who is winning it?

Not the EU, according to a new report from US-based thinktank the Center for Data Innovation. Looking at the progress made by leading AI superpowers China, the US and the EU over the past two years, the report comes to a rather damning conclusion: the US still holds a substantial lead globally, but China is rapidly closing the gap, while the EU, for its part, "continues to fall behind."

The researchers' work is an update on a similar report that the Center for Data Innovation published in 2019, and aggregates metrics from all three regions across six AI-related categories – talent, research, development, hardware, adoption and data. The type of information compiled stretches from total amounts of cash splashed on AI firms, to the proportion of AI researchers compared to the total population, through the number of supercomputers that each country can claim in the top500 list.

One of the biggest differentiators, finds the report, is money. AI start-ups in the US, at the end of 2019, had received over $14 billion in funding from VCs and private equity firms – a whole $8 billion more than China, and far more than EU startups could boast that same year ($3.2 billion).

Future prospects don't look all that good, either. With the UK representing a mammoth 57% of the EU's total funding for AI firms, the researchers anticipate that Brexit would cause investments to drop even more on the continent in the next few years.

What's more, the lack of money to feed the AI startup ecosystem is one of the reasons that creative entrepreneurs flock away from the EU. Data management company Collibra, originally from Brussels, recently moved to New York, for instance; French-native search business Algolia, for its part, is now headquartered in San Francisco.

Pascal Marco Caversaccio is the founder of DAITA Technologies, a startup specializing in transforming raw data into AI-ready databases. As such, he keeps a close eye on VC trends across the globe. "AI development is a costly endeavor and it needs significantly more money from venture capitalists in Europe," he told ZDNet.

"If Europe wants to keep up with the US and China, the amount of investment in European AI startups needs to get to the same level as in the US. Otherwise, it will be difficult to generate the same innovative power. The fact is that the fuel behind AI development is money – and talent, that is attracted amongst others by money," he added.

According to the report, the EU is also spending less than its competitors on research. At the same time, China is ramping up the country's R&D means, which has led to many more AI papers produced in the country. With just under 30,000 papers, China represents 28% of the world's AI research production, while the EU's share has been steadily decreasing in the past few years to reach 23%; the US, meanwhile, holds 18% of AI papers.

For Martin Ebers, the co-founder of the Europe-based Robotics and AI Law Society (RAILS), the solution needs to come from both private companies and the public sector. "The EU needs to give the right incentives," he says. "Companies in the US and China are simply willing to offer more, and that's an incentive for researchers to move there."

China, as a result, has effectively surpassed the EU as the world leader in AI publications in the past few years. Worth noting, however, is the report finding that the quality of EU publications is increasing, while that of Chinese papers is declining.

When it comes to hardware, the US once more shows an indisputable lead. Looking at the top 15 semiconductor firms around the world, eight are US-based, against a single EU company. China boasts none.

Where China is making strides, however, is in supercomputing, where the country has nearly twice as many devices ranked in the Top500 for performance as the US does. Since 2012, China has tripled its presence on the list: it currently has 214 supercomputers on the Top500, compared with 113 for the US, and only 91 for the EU.

On almost all metrics, therefore, the EU seems to be taking a backseat; and according to the researchers, there is no doubt that this is due to stringent regulations that are in place within the bloc. "Many in Europe do not trust AI and see it as technology to be feared and constrained, rather than welcomed and promoted," concludes the report, recommending that the EU change its regulatory system to be "more innovation-friendly".

The General Data Protection Regulation (GDPR), say the researchers, limits the collection and use of data that can foster developments in AI. Proposals for a Data Governance Act, while encouraging the re-use of public sector data, also restrains the transfer of some information; and by creating European data spaces, the regulation could inhibit global partnerships.

Recent reports show that the last year has seen almost a 40% increase in GDPR fines issued by the EU compared to the previous 20 months, reaching a total of $332 million in fines since the new laws started applying. In that context, it is not rare to find that some firms are deterred from developing AI systems altogether, out of fear of receiving a fine – even for the most well-intentioned innovations.

But for RAILS' Ebers, the conclusion reached by the Center for Data Innovation's researchers remains somewhat unfair. "Of course, it is important to look at how many AI systems are developed, how many research papers are produced, or how much access to data you have," he says. "But my criticism would be that the report doesn't account well for the regulatory frameworks that are being drawn for AI.

"Of course, there is no need to over-regulate all kinds of AI systems. But in some sensitive areas, like facial recognition, we need to look closely at how we will prevent discrimination," he continues. "The idea is that we can stick to European values and try to create rules that find the right balance between innovation and the various concerns that are connected to the use of AI."

SEE: Facial recognition: Don't use it to snoop on how staff are feeling, says watchdog

More than depicting strong AI rules as a setback, the EU has rather prided itself on leading the way in establishing tighter controls over algorithms. Last year, the bloc published a white paper on AI, defending a vision of a "trustworthy technology" that puts people first – and indirectly pointing the finger at the looser restrictions in other countries.

Recently, the European human rights watchdog also unveiled new guidelines that seek to ban facial recognition altogether, when the technology can lead to discrimination based on attributes like sex or ethnic origin.

Digital rights activists strongly hope that as the EU designs strong standards for AI, other countries will follow suit. As Ebers explains, better protection doesn't necessarily inhibit new ideas: "The EU has made it pretty clear that they want to create an internal market for AI. Europe might become a leader in the market of non-personal data, for example," says the researcher. "You could have models that derive from data attached to IoT sensors on machines, not individuals."

In a race for AI that is only accelerating, the EU has found itself set against strong competitors – and it seems that the bloc is banking on carving itself a spot in the quintessentially European field of regulation. The next challenge is to get the rest of the world on board, too.