Do you want to live in the future? If you do, then you’re going to want to give your favorite AI assistant the ability to control your thermostat. This is better than the Jetsons!
Written by David Gewirtz, Senior Contributing Editor on Feb. 23, 2018 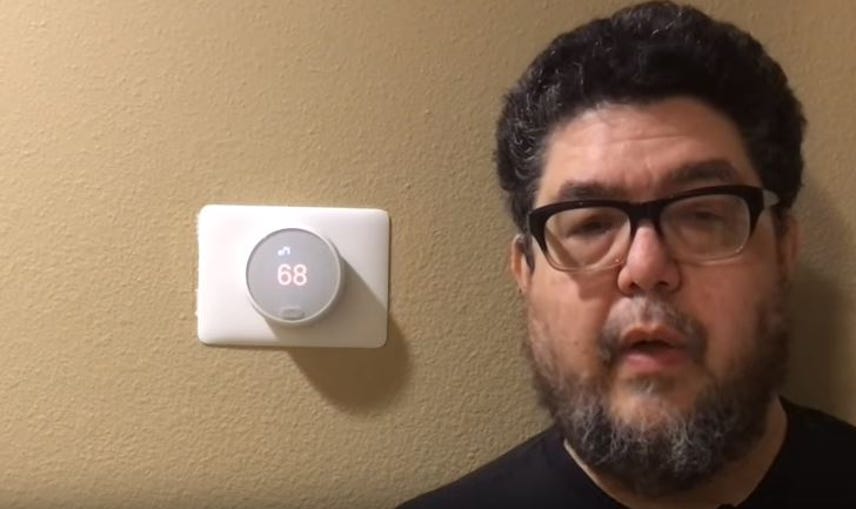 Within a few days of arriving at my new house in Oregon, I discovered two things: winters are colder here than in Florida, and the thermostat was broken. It would turn on the heater, but that was it. It had no concept of temperature, automation, or anything else.

I've long wanted to install a smart home thermostat, but the heating system in my old home back in Florida was proprietary. None of the smart thermostats (except for the very expensive and very badly designed one made by the company) would work. So when I got here to Oregon, I was excited by the idea of nesting with a Nest.

There are two different Nest thermostat models. The plain ol' Nest is $249 while the Nest E is $169. The difference is that you can get fancy metallic colors and a transparent screen on the more expensive model. The less expensive model has a just-as-readable translucent screen and comes in white.

I bought the Nest E because I've never confused my thermostat with jewelry. I don't need silver or copper or black. Frankly, I prefer my thermostat to just blend into the background with the rest of my wall-mounted home management hardware.

As it turns out, I was lucky. I hadn't bothered to check the Nest Compatibility page until after I bought the thing. To confirm you can use the Nest, you need to open up your existing thermostat and check to make sure you have the right set of wires. Fortunately, I did.

Opening up the existing thermostat was much harder than I expected. Did I mention I'm not exactly a handyman? I'm good with computers, not necessarily HVAC systems. My wife still cringes whenever I pick up a power tool. Even so, I was convinced I could make it happen. I could do it. What good is an engineering degree (okay, computer science) if you can't replace your own thermostat?

Nest's instructions were pretty good, and I also found a couple of helpful YouTube videos. The biggest challenge was trying to get the new thermostat wiring ring to mount to the wall. This probably won't be hard for you, but the moving truck hadn't arrived yet, so all I had at my disposal for tools was one screwdriver and a roll of gaffer's tape I keep in the car (because gaffer's tape rocks, that's why).

Actually, I had another concern. All pictures of the Nest show a nice little circular unit, but most existing home thermostats are ugly rectangular affairs. I was concerned that once I took off my existing thermostat, the new Nest wouldn't cover up the scars or unpainted part of the wall hidden by the original thermostat.

I needn't have worried. The Nest comes with a very nice backplate that mounted under the wiring ring and covered up the fugly. You'll see that in the accompanying video.

Once you install the Nest, you can adjust the thermostat just like any other thermostat, right on the unit. In the Nest's case, it's a matter of spinning the dial and choosing your settings. If you ever used one of the original iPods, you're fully trained up.

You can choose heat mode, cooling mode, or a mixed mode that allows you to heat below a certain temperature and cool above another temperature. Those two values need to be five degrees apart. There's an eco mode, and also a programmable option. You can either program specific times and temperatures or allow the Nest to learn your preferences simply based on how you adjust the thermostat.

I found the learning mode to be a bit odd. Suddenly, the temperature would go up or go down for no apparent reason. This was because, on a previous day, based on whatever mood we were in or how we were feeling, we'd adjusted the thermostat.

Just because we were cold on one Tuesday at 2pm doesn't mean that we want the heat blasting on every Tuesday. I quickly disabled that feature. On the other hand, I do appreciate our specific settings. For example, I very much like waking up in the morning with the house warmed up a bit. The heat goes on about 30 minutes before my alarm goes off, and while I will never, ever forgive Alexa for waking me (yes, I know it's her job, but still), I can appreciate the benefits of a warm house on a cold winter's morning.

While controlling the Nest from the dial itself is fine, there are additional ways to control it. You can use the Nest's Web application or smartphone app, which is very handy. One day, my wife and I were out when the temperature plummeted. I was concerned our little dog would get cold, so I pulled out the Nest app, dialed up the temperature, and Pixel was able to stay warm.

Using Alexa to control your Nest

Then, of course, there are the AI assistants. I have a bunch of Alexa devices in the home, and it's quite nice to be able to tell Alexa to raise or lower the temperature. Key to this is binding the Nest skill to your device, which is a quick process. Then there are a couple of commands you can try out.

To query what you've set your thermostat temperature, ask, "Alexa, what is the thermostat set at?" Note here that I'm asking "set at," not just "at."

To change the mode, tell Alexa, "Set thermostat to heat," or "Set thermostat to cool." I found that the mixed mode had mixed results, and it's just far easier to put the thermostat in heat or cool mode. Also, when I'm doing a webcast, I can say, "Alexa, set thermostat to off," and the HVAC system will shut down, giving me some quiet for a recording.

I've been using the Nest since mid-October and once I figured out how to reliably instruct Alexa as described above, I've been very happy with it. I like the ability to control things from Alexa and my smartphone, but even after all the gadgets I've hooked up, I have to say that I'm still a bit surprised just how convenient it is to be able to command Alexa or tap an app for temperature control.

With one caveat (I'll mention that in a minute), I can wholeheartedly recommend the Nest thermostat. In fact, if you are replacing a thermostat, I think you'll do yourself a disservice to not install something like a Nest. It's just that convenient.

That said, I like it. I like it a lot. It's convenient, it works, and it does the job of managing temperature better than any other thermostat I've had. Plus, in some states, there's even an energy rebate for buying one.