With all the excitement and discussion surrounding the recent release of Linux Mint 12 (and Fedora 16, and openSuSE 12.1), it is easy to overlook the smaller Linux distributions.
Written by J.A. Watson, Contributor on Nov. 30, 2011

With all the excitement and discussion surrounding the recent release of Linux Mint 12 (and Fedora 16, and openSuSE 12.1), it is easy to overlook the smaller Linux distributions. Vector Linux is a good example of this, with their recently announced 7.0 distribution. The relatively small number people behind the Vector Linux distribution have put a phenomenal amount of work into this release - I saw the first VL7.0 Beta releases early this year, and there have been several Release Candidates since about May or June. The result of all that hard work is what I consider to be one of the nicest of the Slackware-based "easy-to-use" Linux distributions. 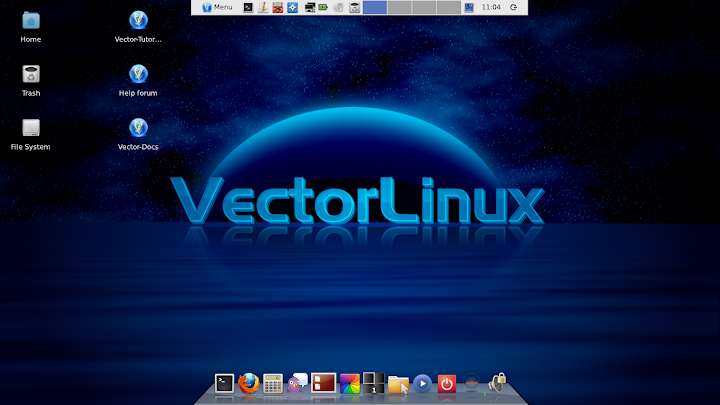 The Release Announcement gives a brief overview, and the Product Page gives a lot more detail on the exact content of the new distribution. It is available as an Install-only (not "Live") iso image, or a LiveCD iso image. I have not yet found a way to convert either of these to a bootable USB stick, so I have had to burn a CD of the installer. When you boot the installation CD, you have the choice of using a GUI installer (the default), or a text installer (type "install" at the boot prompt). I have tried both, with mixed results. The GUI installer is pretty nice, although a bit verbose and rather slow compared to a lot of the current major distributions. One good thing that can be said about it, though, is that it is their installer, the Vector Linux team created it, so they should know it inside-out. I ran into a couple of unfortunate problems with the GUI installer, though. First, it has quite a bit of trouble getting the screen resolution right on many of my netbooks. It doesn't like 1024x600 at all, in fact, and usually ends up at 800x600 on those systems. Once I got past that, and at least got the GUI installer running, I found that a few of the windows were too large for the netbook screen (at least at the resolutions it was using), and there were no scroll bars or other access methods on the over-sized windows. That meant, for example, that I was not able to find any way to get to the root password entry areas. Fortunately, that is one of the last steps in the installation, so I was able to just quit the installer at that point, and finish the setup and configuration manually after rebooting. I will stress again, though, that this only happened on netbook systems with very small and very low resolution screens, it was not a problem on any of my "normal" laptop or desktop systems. The text installer, on the other hand, seems to have been left behind a bit by the development of the GUI installer. When I used it on the systems where the GUI installer had problems, I found that with the text installer there is no option to install GRUB, it only offers LILO, which I don't want... sigh.

Anyway, once you get through the installation (and I say again, it is not likely to be as much trouble for most common systems as it was for my netbooks), you get the very nice looking desktop shown above. Vector Linux uses the Xfce (4.8) desktop, with a Cairo Dock at the bottom of the screen. There are lots of details in the links above (release announcement and product page) about the specific packages and programs included in the distribution, so I will only hit a couple of important points. It includes both Firefox (8.0.1) and Opera (11.52), which makes me happy; and Geany which will make Jake happy. Lots of other Linux standards, such as GIMP, Pidgin, Brasero, Mplayer and Shotwell. It does NOT include LibreOffice or OpenOffice, it has AbiWord and Gnumeric. Of course, as with any Linux distribution, anything that isn't included which you really want/need can be added, mostly with very little effort.

I find the desktop to be particularly pleasant to use. The Cairo Dock provides a nice animation as you move the cursor across the icons (Mac users will be used to this): 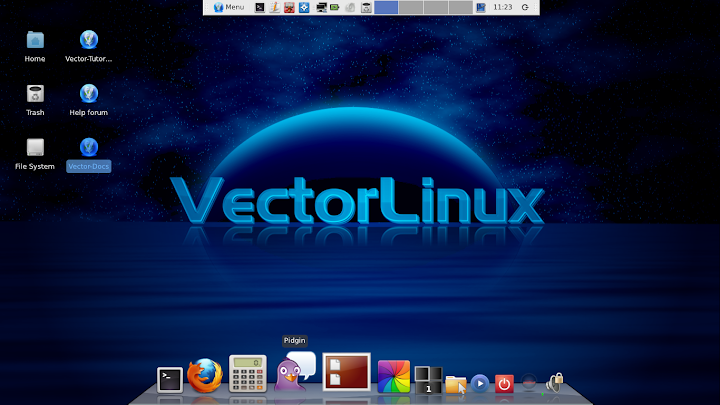 The dock also disappears whenever it would overlap with the active window on the screen, which is an interesting variation on the "autohide" function, a sort of "hide when you must" concept. To see how this really works, open a couple of windows with one overlapping the dock and the other not. Then as you move focus back and forth between them watch the dock appear and disappear. By the way, the action is really "disappear", as it fades out and fades back in, rather than sliding off and on the screen as most panels have done.

The Xfce Menu is available on the top panel, or by right-clicking anywhere on the desktop background, with a complete list of installed applications and utilities. 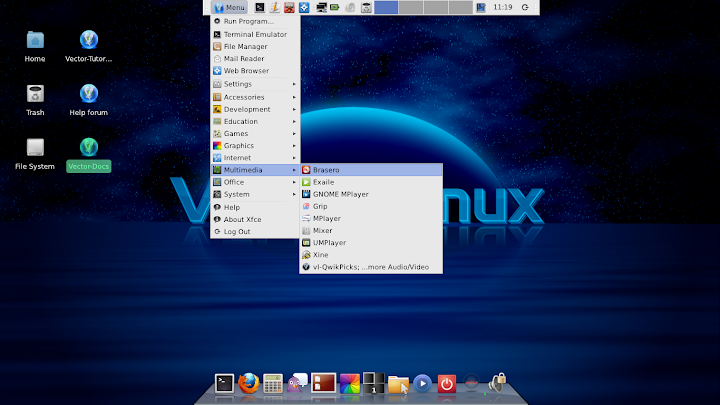 This kind of cascading menu should be very familiar, so I won't spend any more time on it here. Right-click on the top panel (the easiest places are at the two ends), and choose "Panel Preferences" to customize the panel. The most obvious thing to do is autohide (Automatically show and hide the panel), especially if you are using a netbook with limited screen space. The panel can also be moved to either side of the screen if you like. Once you have that done, combined with the previously described fade-out of the Cairo Dock, you have a lot more screen space for an application, like this: 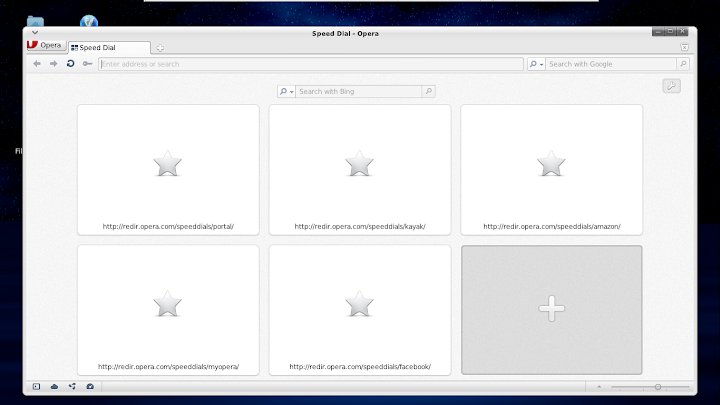 A few other quick notes from my installation and testing... Vector Linux uses Wicd for network management, not Network Manager. This is not a problem as long as everything works as expected, but there are occasional problems with wireless network setup which can cause you to swear at Wicd. Another case where this could be important is if you need to use a 3G/4G Wireless Broadband modem. I have not been able to get the Broadcom 4313 WiFi adapter to work properly yet, but the Ralink WiFi adapter works fine - that's an interesting reversal of fortunes. The blasted Synaptics ClickPad doesn't work properly, but there's nothing new or unusual about that. This release offers a choice between GRUB or LILO on installation, which is good - but they use GRUB 2, and the automatically generated grub.cfg file seems to have some problems, I couldn't boot any of my other Linux partitions from it.

In summary, Vector Linux is a very good distribution, which has received a lot of care, attention and hard work from its developers and the end result shows that. There are a few rough edges here and there, but the number of them and how rough they are depends very much on the kind of system you are using - the more "common" the system, the less likely you are to run into something. It was a complete snooze to install on my standard-laptop Samsung P-580, for example. As with many of these "smaller" Linux distributions, though, the best part is certainly the user community. Have a look at the Vector Linux Community web page. In particular, check out the Forums and see how people are helped there. It is really an example of the Linux community at its best.