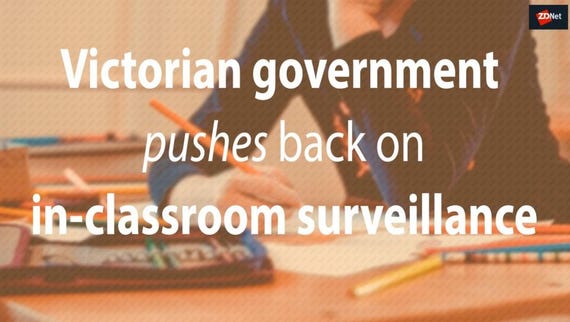 The Australian government in August last year kicked off a trial that saw surveillance cameras placed in classrooms to monitor if students were in attendance.

The now-completed trial took place in a few private schools in the state, and the funding was accounted for at a federal level. According to the Digital Rights Watch -- a charity aimed at educating on and upholding the digital rights of Australians -- the next phase of the trial was to roll out the program to state-run schools.

The initiative would involve the placement of cameras within classrooms that scan the faces of students and then compare the images against photos kept on file. Any instances of missing students would then be reported.

However, Victorian Education Minister James Merlino has moved to block the initiative from being rolled out, calling it "Big Brother-like".

With concerns over the privacy of students and the level of consent kids are capable of providing, Victoria's Information Commissioner Sven Bleummel told ABC RN Drive that he personally wouldn't let his child participate.

He explained the tech that would be in classrooms would not just be for initial roll call in the morning, rather they would be constantly scanning the students throughout the day.

"We have to make some fundamental choices about the society we live in and the idea that our children should consider it normal to be in a fairly constant state of surveillance, I think is a rather unhealthy one," he told ABC.

Additionally, the Victorian government wants schools to undertake a rigorous privacy assessment of the surveillance technology and receive explicit, informed consent from parents and carers.

"The second category of risk is the much more understandable and tangible risk of information being secure," Bleummel said, pointing to the security concerns brought up by the Australian government's My Health Record initiative.

He said he was concerned that although the system itself may be strongly encrypted, the biometric information is still captured.

"Unlike a password, you can't reset your facial geometry," he added.

On the topic of consent, Bleummel said parental sign off isn't a sufficient safeguard, particularly when parents might feel obliged to say yes only to avoid having their child ostracised, posing the question that it might not be a fully voluntary consent given.

Another issue with consent, according to the Information Commissioner, is the length and complexity of the terms and conditions in documents that provide such services, pointing to social media sites as one example, saying people often do not actually know what it is they're consenting to.

"Fundamentally, we believe that students have a right to not be recorded without their -- or their guardian's -- consent," Digital Rights Watch Chair Tim Singleton Norton told ZDNet.

"It's imperative that every parent or guardian understand just what is at stake here. Constant monitoring of their child's face, along with the very real possibility of a mass data breach, should be of concern. This is not the world we want to build for our children."

The Department of Home Affairs is currently responsible for the operation of a central hub of a facial recognition system that will link up identity-matching systems between government agencies in Australia.

The Face Verification Service (FVS) is a one-to-one image-based verification service that will match a person's photo against an image on one of their government records, while the Face Identification Service (FIS) is a one-to-many, image-based identification service that can match a photo of an unknown person against multiple government records to help establish their identity.

Access to the FIS is limited to police and security agencies, or specialist fraud prevention areas within agencies that issue passports, as well as immigration and citizenship documents.

The Department of Home Affairs told a Parliamentary Joint Committee on Intelligence and Security in May it had purchased a facial recognition algorithm from a vendor to be used for the FIS, but claimed immunity on disclosing the contracted vendor.

Management of the Australian Criminal Intelligence Commission's now shuttered AU$32 million biometric project has been called out as poor by the country's Auditor General.

The country's newly crowned Minister for Home Affairs Peter Dutton has said facial recognition at airports in Australia is merely a few 'technology generations' away from being rolled out.

Join Discussion for: Victorian government pushes back on in-classroom...