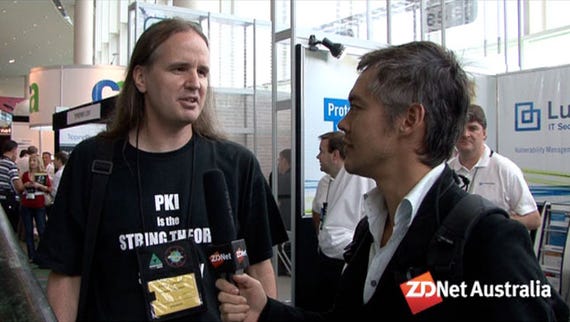 video Do Mac OS X users really need antivirus and if so, why? ZDNet.com.au recently posed the question to security professionals at the AusCERT 2009 IT security conference on the Gold Coast.

Many Mac users still avoid antivirus (AV) because of the belief that no one has made malware for Apple's platform. But over the past two years, attackers have started experimenting, typically by social engineering or luring a Mac user into downloading fake antivirus or codecs in order to bypass the application signing process that usually keeps a Mac safe.

Given the appearance of malware for Macs, albeit small in number compared to Windows machines, there's growing consensus amongst security professionals that antivirus is a "must have" for Mac OS X systems. Network security executive for IBM's security division ISS, John Pirc, told ZDNet.com.au that he used AV on his Mac because it is "better to be safe than sorry".

Another executive from encryption vendor RSA Greg Singh said the operating system doesn't matter — users should get used to the performance degradation that comes with AV because every platform is vulnerable. Microsoft senior security architect Rocky Heckman said AV became necessary when Apple in 2001 decided to underpin OS X Tiger with the BSD operating system because it made Macs an easier platform to write malicious code for.

One respondent said they'd even seen "botnet activity" on the OS X platform, while others referenced the popularity of the stylish computers as the reason for their being in danger.

But a lone security researcher, Peter Gutmann from the University of Auckland, New Zealand, reckons the AV-free world that Mac users have enjoyed is not quite over yet, and asks why spend money defending what's not being attacked?

What do you think? Do Mac OS X users really need antivirus software? Why or why not?