Developing a web browser apparently isn't all work and no play, at least not if you're working on Jon von Tetzchner's Vivaldi browser project.

There, both serious, important functionality and more playful, less essential stuff are worked on simultaneously. Both types of technology can find their way into the released product, according to the project's founder and former Opera CEO von Tetzchner.

Falling into the 'serious and important' category are an email client and functionality for synchronizing things such as setup, bookmarks, and notes between several instances of the browser. Both these areas of development are top of the company's to-do list but, as advanced features, they consume time and resources.

The Vivaldi browser offers an easy upgrade from Google Chrome

Most browsers are now being dumbed down to appeal to the mass market, but Vivaldi - now at the beta 2 stage - is going the other way, to appeal to "power users"

"There are always further developments going on here, and we clearly have an ambition of having a product that doesn't stand still. We'll release new and fun stuff every time, but sometimes there are features that require a lot of work," von Tetzchner tells ZDNet.

"We're working on a couple of larger projects like the email client and sync, which are hard. We'll launch them when they're ready."

That has been his line ever since he started up the new web browser company in late 2013. Whenever asked when functionality is coming, von Tetzchner always replies, "when it's ready."

He is under no pressure from quarterly finance reports and impatient shareholders, and he seems to be very happy with that.

"We really wanted to provide an email client from day one, but it wasn't ready. You can't release anything until you feel reasonably safe, and we've had some problems. It's hard to create innovative software," he says.

The idea behind Vivaldi is to offer a more advanced browser, capable of managing a large number of open webpages and maintaining a lot of bookmarks, hence the importance of improving its sync features. The browser is also meant offer users the option of carrying out the same function using various methods.

According to von Tetzchner, it's just a group of his developers who are working on the email client, because he thinks it doesn't make sense to put all the developers on the same project.

Doing so won't help much, he says, and points out that some staff need to be working on other features at the same time. That way the project will continue to bubble with new ideas and innovation.

"How do you make innovation happen? Personally, I think it's the other way around: how do you kill innovation? You suppress it by introducing too firm limitations on people. Of course, everybody knows we regularly have to send out new versions, and everybody is agreed on what product we're making here. But part of it is that we'll also make up new things all the time and have fun," von Tetzchner says.

"The guys are having a good time, and we played recently with a pretty cool thing. We'll see if and when we'll launch it, so I'm not sure how much I should talk about it now," he says.

Then, von Tetzchner changes his mind. He obviously wants to show off Vivaldi's newest idea.

"So we're transcending the web browser, and are entering the real world, and this is the first step. This is so cool, and it was just something a developer came up with the other day." 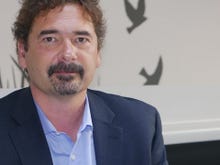 'When in doubt, make it an option': How Vivaldi is trying to make the browser personal again

Vivaldi CEO Jon von Tetzchner on his browser 'for our friends' -- and where it will go next.

He says this approach is typical at Vivaldi. Someone has an idea, they play around with it, and decide whether it will be included in the product.

"Maybe it comes in the next release, we're not sure now. But if it gets there, it'll be something odd, different and fun," he says.

The team already has begun thinking of other ways of controlling the ambient light, and points out that this function can have a lot of real-world applications.

"The fact that we're connecting to the world, that's something different. This is part of what Vivaldi's about, and one of the reasons we thought something new was needed," von Tetzchner says.

"The web browser is a tool that all of us are using a lot, and we're going to make it more useful and more fun. The main thing now is that we're having fun, and have a good team. I feel we're on the right path."

Von Tetzchner says the company's goal is to become a worthy successor to Opera. For him it's all about innovation and developing a product both the Vivaldi team and their users enjoy using.

"Obviously, you can't do everything ad hoc, but you have to allow people to think for themselves. That makes it more fun for all involved, and for me the greatest thing is when one of the guys comes to me, and says, 'Hey, look at this'," he says.