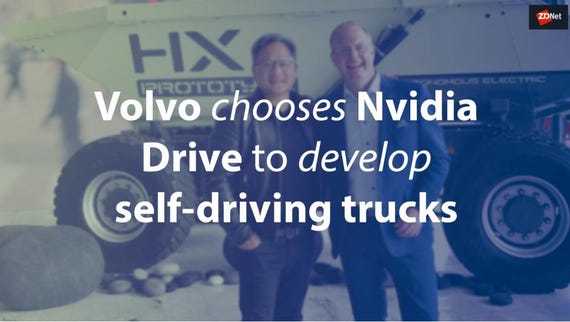 Nvidia will provide its autonomous driving platform to vehicle manufacturer Volvo for the development of self-driving trucks.

"If we are to succeed in the future with the speed, quality and safety, and to gain benefits of autonomous driving, we need to partner up with the best guys. In this world of unknowns, you need a partnership built on trust," Volvo CEO Martin Lundstedt said.

Development of these self-driving trucks will be conducted in Silicon Valley and Gothenburg, Sweden. According to Volvo, the AI will build on the Drive AGX Pegasus platform that has been previously used by the Swedish car manufacturer.

"By combining the high-performance, end-to-end Nvidia Drive solutions with the scale of the second-largest truck maker globally, Nvidia and Volvo Group can bring the efficiencies of autonomous trucking to the world's markets sooner," Volvo said.

This is not the first time the companies have come together, with Volvo announcing in October it would use Nvidia's AGX Xavier platform to develop AI for its cars. In 2017, Nvidia and Volvo also partnered up to develop advanced systems and software for self-driving cars.

Nvidia has been expanding its footprint in the automotive sector, having inked a similar deal with Continental for it to use the Nvidia Drive platform from 2021 onwards.

Volvo unveiled its first cabin-less, autonomous truck, Vera in September. Since then, Vera trucks have been used in a pilot program that entails making trips from a logistics centre to a port in Gothenburg with minimal human interaction while also significantly reducing the environmental impact of the shipping process.

Just over a year after first announcing plans to collaborate, Singapore's Nanyang Technological University and Volvo Buses have launched a driverless electric bus stretching 12 metres long that can accommodate 80 passengers.

The Swedish auto giant will use the Nvidia Drive platform in production vehicles early next decade.

The cabless truck can attach to any standard trailer, but isn't commercially available.