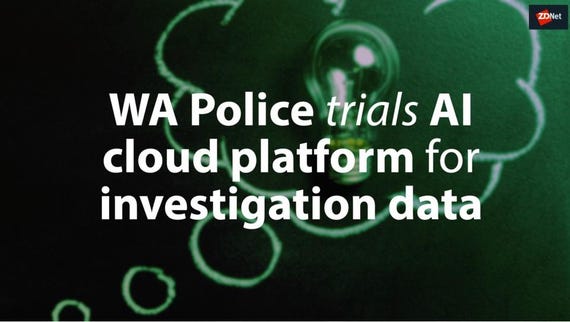 The Western Australia Police Force (WAPF) has partnered with Microsoft to trial a pilot cloud-based platform that is aimed toward making it easier for officers to track the digital footprints of criminals.

The cloud-based platform analyses large quantities of digital information, and then applies artificial intelligence (AI) techniques to "make sense" of the information collected during investigations, such as surfacing important information or patterns.

According to the WAPF, over 2.8TB of data are analysed in every case involving digital evidence which can make information management very obstructive in solving a crime.

"Whilst information technology alleviated this problem for a while that grace period is now over. The same technology which saved us is now swamping us with incomprehensible quantities of information," WAPF inspector Tim Thomas said.

The pilot solution is not designed to trawl for evidence, Microsoft said, it is aimed at removing grunt work for officers by contextualising investigation data so they are able to spend more time in making higher-level decisions.

According to Anthony Doig, Director of Innovation for Modis, the pilot has allowed the WAPF to save a lot of time.

"We've found addresses or bank accounts or firearms in hundreds of thousands of images and are taking a few hours to do that rather than a few months. It's generating reports in seconds," Doig said.

"It has found a photo of a person, and then completely different data, say a text message or the mention of that same location the day before, so you can start connecting up those pieces of information and presenting them back to police."

The cloud-based platform uses Modis' Data & AI platform to take in and analyse information, as well as Microsoft Azure's based cognitive services to translate data.

The platform does not change any of the data or draw any scientific conclusions, Microsoft said, and only creates relationships that already exist in the collected information. Police officers then have the discretion of determining whether they are relevant or not. Due to this, Thomas said the platform is viable because of "how easy it is to use the results in the judicial system".

Access to the FIS is limited to police and security agencies, or specialist fraud prevention areas within agencies that issue passports, and immigration and citizenship documents.

Some residents may be developing the technology but it won't be permitted for use on their doorstep.

Employees not the target of encryption laws: Home Affairs

Australian developers really do need to relax. Cops and spooks are being told very clearly that the Assistance and Access Act isn't for dragooning you into deceiving your bosses.

The opt-in program will see some vehicles in Melbourne's south-east fitted with GPS sensors to track stolen cars.

Police can't force you to unlock your phone by iris, face or finger (TechRepublic)

Police can't force you to unlock your phone by iris, face or finger.