Capacitive screens are all the rage. iOS, Windows Phone, BlackBerry, Android: they all have them.
Written by First Take , Previews blog log-in on June 17, 2011

Capacitive screens are all the rage. iOS, Windows Phone, BlackBerry, Android: they all have them. They're smoother and easier to use than the old resistive touchscreens, and all you need is a finger, not a scratchy plastic stylus. But what if you want to quickly take notes? Typing on a touchscreen is, to say the least, awkward and slow. You could try and scrawl handwritten notes with a fingertip, but that's counter-intuitive, as well as hard to see just what you've written.

The answer is simple: it's back to the old days of the stylus. There's something natural about writing with a pen on a screen – even on the low resolution touch surface of a tablet (whether it's an iPad or an Android Honeycomb device). Capacitive styluses are now relatively common, and while some have innovative shapes and designs, others like the Wacom Bamboo Stylus take the old familiar pen as a model. 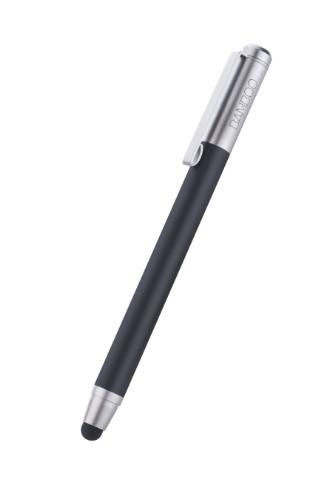 Pick up the Bamboo Stylus for the first time, and you'll find it pleasantly weighted with a smooth grip. It's best to hold it just above the metal tip holder, as the edge of the metal can be a little uncomfortable after a short while. The tip of the stylus is a soft rubber, and slides easily on most tablet screens, giving you a surprising amount of control — so you can use the Bamboo Stylus to navigate apps as well as an input tool (something you'll find useful on a cold winter day!).

A metal clip helps you keep the stylus safe in your pocket. If you don't want it, you can unscrew the metal end of the stylus to remove the clip — something we've not seen on many capacitive styluses. At just 120mm long the Bamboo is shorter than many pens, and it's easy to lose track of it in a laptop bag, so you may want to fit a lanyard to attach it to a tablet case.

We weren't sure about the lack of a cover for the rubber tip, and as a result we'd be inclined to be careful just how we stored the Bamboo Stylus. The tip is very soft and flexible, almost like a bubble, and we were worried that it could puncture and fray. You can probably repurpose the cap of an old felt tip pen if you want additional protection. The tip is replaceable, although there's no pricing yet for spare parts.

The stylus worked well with all our test software on an iPad 2 and iPhone 4, including the ArtRage natural media painting package. It's not yet certified for Android Honeycomb tablet OS, but we had no trouble using it with some of the first Android art applications, or with note-taking tools and handwriting recognition software. However we did find the capactitive screen on an HP tm2 tablet PC unresponsive — even though the same actions worked well with a finger.

Wacom's matching Bamboo Paper app is a nice little freeform note-taking and sketch tool. It's no OneNote (then again nothing else is!), but it's a nice match for the Bamboo Stylus. Wacom has given it the feel of a natural media sketching application, while still limiting the choice of pen types to those that match the Bamboo Stylus's form factor. Perhaps best treated as an electronic version of the ubiquitous little Field Notes pads, its large writing area means you can quickly scrawl notes onto a page, matching them with sketches and diagrams in a handful of different fountain pen ink colours.

If you want to share pages with others (especially those not using iPads), you can email a page as an image or send a whole notebook as a PDF. We'd have liked to have been able to send single pages as PDFs — but this is a free app (at least until June 30th).

If you want a pen for your tablet, then getting one from a specialist in tablet input technologies like Wacom is a sensible option. The £24.99 Bamboo Stylus is well balanced, easy to use and works well with a wide range of devices and applications — all you really want from a stylus!