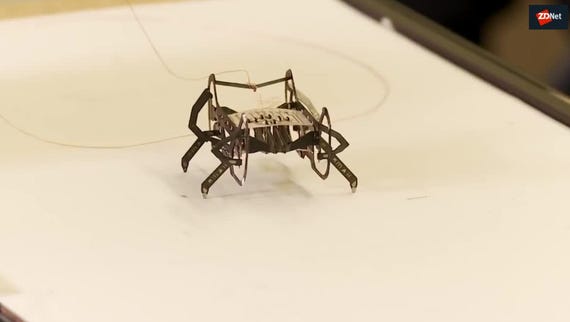 Roboticists at the Harvard John A. Paulson School of Engineering and Applied Sciences (SEAS) have unveiled a centimeter-scaled robot resembling a cockroach.

Like the insect from which the engineers drew their inspiration, The Harvard Ambulatory Microrobot -- HAMR -- can turn sharply and run at high speeds, climb, carry payloads, and survive long drops unharmed.

It's an example of biomimicry. A popular engineering tactic in top robotics labs, biomimicry is based on the principle that nature has already perfected an array of elegant mechanical systems. Rather than reinvent the wheel, engineers have learned to look for the nearest wheel corollary in nature.

The real breakthrough with HAMR is the actuation (engineering speak for the parts that move). Each leg has two actuators, which closely mirror the joints of cockroaches.

"The HAMR platform evolved from our exploration of millimeter-scale fabrication and actuation strategies," said Robert Wood, Professor of Engineering and Applied Sciences at SEAS.

There's been a lot of interest in the advantages of small, relatively inexpensive robots that can operate in teams.

It's easy to imagine several HAMRs, each equipped with a unique sensor, descending on a pipeline or disaster area. That kind of distributed sensor network could provide invaluable data from hard-to-reach areas without risking a more expensive robotic platform.

In addition to disaster relief and infrastructure inspection, the military has been eagerly studying the utility of agile swarm robots, a dramatic departure from a current war fighting doctrine based on large, immensely complex platforms like fighter jets and aircraft carriers.

An army of cockroaches would certainly carry a certain psychological impact in battle.

Join Discussion for: Want to make a robot that can't be killed?...