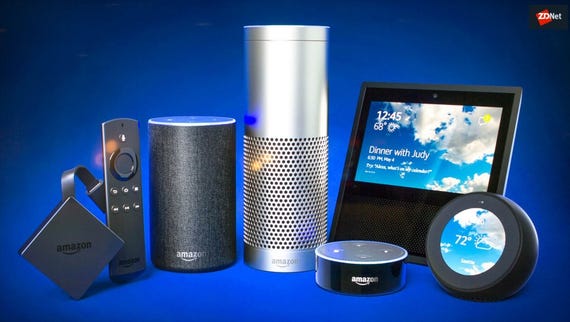 Amazon sells its hardware cheap because making money that way is not (at least for now) its priority. This is a land-grab; whichever company reaches enough homes fast enough will become the effective standard.

And Amazon already managed to grab a significant lead, largely because the original Echo has been a surprise hit. Who knew that a Bluetooth speaker with a built-in digital assistant (and not a thermostat or fire alarm) was going to be the device that finally got consumers excited about the smart home?

Since then Amazon has rapidly added to its hardware portfolio, and what's clear is that the company is trying to make sure that its hardware and services are at every fundamental touch-point in the home; the new Echo Spot is going to replace your alarm clock, for example.

These products may not all be hits, but Amazon can iterate at a much faster rate than its rivals to keep ahead of the game: Apple's HomePod hasn't even arrived yet.

Home hub is the key

Plenty of companies are playing in the smart home space, making smart locks, cameras, motion sensors, and the like. But what really matters is which company will provide the glue to connect all these different elements together.

That's why the new Echo Plus is interesting: Amazon is making an explicit play to be the home hub because it can automatically discover and set up lights, locks, plugs, and switches without the need for additional hubs or apps.

And the Alexa 'routines' feature will be able to tie all of this together by allowing you to automate a series of actions with a single voice command: saying "Alexa, good night," and having it turn off the lights, lock the door, and turn off the TV, for example.

A platform that other apps and devices can connect into? This starts to sound a lot like an operating system for the home to me.

It's not just the home, either; Amazon announced a deal to make Alexa available in BMW and Mini vehicles from the middle of next year, allowing drivers to use the digital assistant to get directions, play music or control smart home devices while travelling, without having to use a separate app. Travellers will also have access to Alexa skills from third-party developers like Starbucks, allowing them to order their coffee while driving and thus skip the line.

Back in January, Amazon and Ford said they were working together to allow voice commands to turn on the engine, lock or unlock the doors as well as play music and use other skills.

Amazon's Alexa seems to have made a breakthough because, unlike voice assistants like Siri or Google Assistant, it's not trying to cannibalise other ways of communicating with devices, but actually doing new stuff. On a phone, Siri languishes because it's easier to use the on-screen keyboard. But in the home -- and on the road -- voice makes more sense.

It's still early days but I think Alexa has a good shot at becoming one of the standard interfaces, certainly for consumers -- an operating system for the home, if not more, if the automotive tie-ups take off too. All of this will make Amazon a serious force to be reckoned with.

Windows has the desktop, and Android and iOS can fight it out for the smartphone, but right now Alexa has a lock on the smart home.

Throwing shade at its two data-hungry virtual assistant competitors, Amazon and Google, the iPhone maker said that nobody has "quite nailed it yet."

MORE ON THE AMAZON ECHO

Join Discussion for: ​Watch out Windows, Android, and iOS: Amazon's...