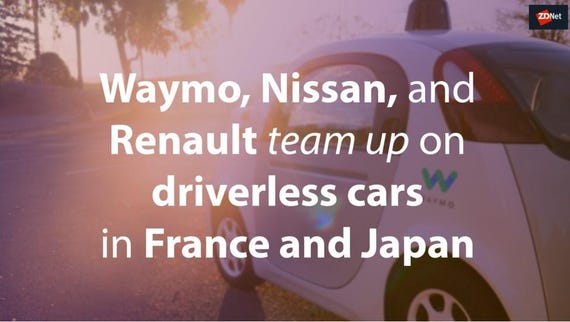 Waymo, Nissan, and Renault team up on driverless cars in France and Japan
Watch Now

Alphabet's self-driving car company Waymo has entered into a partnership with Renault and Nissan to research how self-driving vehicles may be used commercially for passengers and deliveries in France and Japan.

The agreement between the three companies will last for an "initial period", with the companies not providing further details on the duration of the partnership.

Under the partnership, the companies plan to assess market opportunities and research commercial, legal, and regulatory issues related to the viability of providing driverless transportation-as-a-service offerings in the two countries.

"This is an ideal opportunity for Waymo to bring our autonomous technology to a global stage, with an innovative partner." Waymo CEO John Krafcik said in a statement.

"With the alliance's international reach and scale, our Waymo Driver can deliver transformational mobility solutions to safely serve riders and commercial deliveries in France, Japan, and other countries."

See also: Interacting with cars: What's on the horizon?

The research will initially be conducted in France and Japan, home to Renault and Nissan headquarters, respectively, with the partnership having plans to potentially expand to other markets, excluding China, in the future.

The partnership follows the recent trend of car manufacturers partnering up with driverless car companies. Last month, GM's driverless car company Cruise raised $1.15 billion from a group comprised of SoftBank, Honda, General Motors, and T. Rowe Price Associates. Prior to that, Honda paid $2.75 billion for a 5.7% stake in Cruise.

In February, Volkswagen was reportedly in talks with Ford to invest approximately $1.7 billion into the latter's subsidiary Argo AI to build a fleet of self-driving cars.

Elon Musk on Tesla's Autopilot: In a year, 'a human intervening will decrease safety'

Some of Waymo's biggest customers are expected to be other businesses, including Walmart and Avis, that want to provide rides for their own customers.

Join Discussion for: Waymo, Nissan, and Renault team up on driverless...