Web 2.0 Expo: the end of the online search driven era?

I attended last week's Web 2.0 Expo in San Francisco with a sense of trepidation.
Written by Oliver Marks, Contributor on April 5, 2009 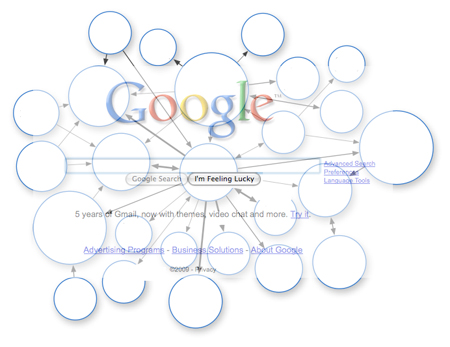 I attended last week's Web 2.0 Expo in San Francisco with a sense of trepidation. A year ago this event was jam packed and had a celebratory, in some cases cocky atmosphere - I was worried this time the expo would be a washout as a result of the gloomy economy. in the event it was a far more mature, sober but well attended affair. As the always entrepreneurial Brian Zisk said to me at one point, times like these are when the real innovation and next generation business successes are spawned.

The only cocky people I ran into this year were enterprise IT folks enjoying the hubris of the thinned out 2.0 vendors and what they perceived as the end of the road for lightweight software - plus the fact they still had jobs in large companies.

The whole point of Web 2.0 is to explore the horizon for the future of the internet. Web 2.0 is a pretty mature concept now: I was taking notes on paper at this conference three years ago. Last week I was using Evernote for notes and Audacity to record audio, taking digital photos of slides and watching the #w2e hashtag Twitter search in a browser window, interacting with people near and far on events as they unfolded.

Stowe Boyd and I presented interim findings of our 'Open Enterprise 2009' research on Wednesday using Emressr, a Web 2.0 presentation tool with built in Twitter feed.

The reality is that Web 2.0 is now very much part of the mainstream, as evidenced by the ajax-y user interfaces of most new enterprise browser based products these days.

Never forget the long tail though - while the sophisticated technological audience ZD Net attracts is generally up to date with Web 2.0, the room was packed for Sarah Milstein's  'Effective Twitter for Communication & Product Integration'. I saw dozens of people scribbling notes on paper and paying close attention.

Asking a few of Sarah Milstein's audience afterwards about the quality of the session revealed many marketing people struggling to get their heads around concepts well understood by the geekier end of the 2.0 movement.

So with Web 2.0 increasingly part of the vast mainstream web why have a Web 2.0 conference? I was privileged to be invited to sit in on a small forum with conference chair Tim O'Reilly plus co-chairs Brady Forrest and Jenn Pahlka and asked Tim his thoughts on the semantic web, which I view as the fundamentals of the next generation of increasingly linked data.

Tim essentially made the valid point that describing the 'semantic web' was essentially quite literally semantics -  putting labels on things. Citing Jeff Jonas's work on identity resolution and context accumulation Tim explained his view that we would very soon be at the point of sensors, face and speech recognition creating a collective intelligence that creates self awareness. This will be achieved by accumulating enough information about an object - whether a person, a refrigerator or anything else - to create a cloud of contextual information that identifies that object in a machine readable format.

O'Reilly believes we are on the cusp of this next generation very soon - and given how quickly we have absorbed the brave new Web 2.0 world of 2007 of open api's and  ‘The Machine is Us/ing Us‘ into our collective online psyches today, I'm sure Tim is right. Separately last week in the area of linked data - which is fundamental to collaboration in breaking down silos - Content Management Interoperability Services (CMIS) was the big topic at the AIIM enterprise content management conference in Philadelphia, and John Dvorak wrote a fascinating piece on Microsoft and Google on Marketwatch.

Search may soon be a thing of the past

'Will Google become Microsoft?' is predictable financial fare but this quote got my attention:

...it's questionable that any other resource can ever unseat Google from its perch. The Internet is simply too big for a newcomer to make any headway. One of the advantages that Google has is the trick it learned from AltaVista: cache the entire Internet on perhaps a million servers (nobody knows the real number), and analyze the cache. I'm not sure how many people realize that Google maintains a copy of what amounts to the entire Web (well, most of it anyway) on its computers. This copy is constantly refreshed. This is not a cheap proposition.

A world of interlinked data - a semantic web in technical terms - could unseat the relatively crude mechanisms of current search today by transforming the way we use the internet. Little steps like the Content Management Interoperability standards plus cumulatively huge ones like O'Reilly's vision of self aware objects will add up to create a new epoch of innovation which will be celebrated at future Web 2.0 conferences.

More immediately, as this middleware revolution across the entire underpinnings of the internet gradually unfolds, web 2.0 agile tools increasingly fill the gaps today.

Reframe It (a browser extension that lets you comment right next to any text or image that you find on the web in your web browser... disclosure: I'm on their advisory board) is being used today as an internal market research tool by a major firm,  who have people privately comment on both client and competitors websites extremely specifically to get feedback, and in thousands of other contextual ways by all sorts of different users.

We all know about Twitter's paradigm breaking success across all sorts of contextual boundaries - and those that don't attend conferences like Web 2.0 expo to find out.

It's easy to put on conferences that market cresting trends in a healthy economy, but it takes guts to keep the momentum going in a down economy (which was incidentally when the original 'Web 2.0' was launched by O'Reilly: to resurrect the web industry post dot-com nuclear winter).

Good conferences are collaborative efforts which build a movement consensus, not places to consume ideas and try to hustle a profit out of them, which is often what some social media 'gurus' are adept at exploiting with endless '10 ways to ...' how to lists.

For me this was a particularly good conference and I look forward to seeing the movement continue...