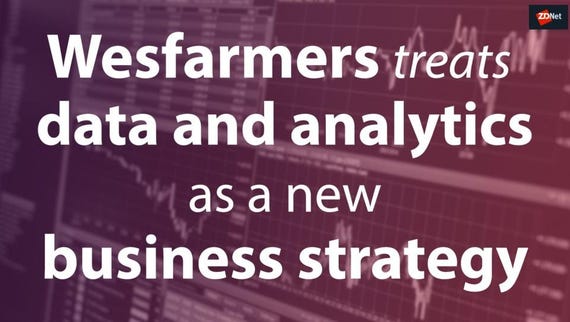 Wesfarmers is hoping to transform the way its organisation uses data, making data analytics a business strategy instead of a side effect.

Speaking on a panel about data-driven cultural change during the Gartner Data and Analytics Summit in Sydney on Monday, Wesfarmers general manager of Advance Analytics Alan Lowthorpe said that while data and analytics has historically served to complement an organisation's business strategy, a shift has occurred where data and analytics has become the business strategy itself.

One business strategy that Wesfarmers has adopted, Lowthorpe explained, is a one-day program focused on data analytics for leadership teams that teach them about data analytics, including the differences between advanced analytics and business intelligence reporting.

They are then taken through one stage of the conglomerate's use cases, such as identification, beta engineering, or the advanced analytics and implications, to highlight what role the various teams in the business play in applying the use cases, followed by this information being cascaded around the organisation.

Read: From big data to AI - Where are we now, and what is the road forward?

"When you think about customer centricity, particularly the use of behavioural data, it can be quite challenging to do that without data so there its relevance becomes a lot closer to the surface. But that's an end-state that we want to move towards so I think it's really about at first -- in the initial stages -- allowing [for the development] of business priorities such as how can we help make better decisions faster," Lowthorpe said.

"When we talk about use case and they're saying where are the results with [this process], it helps in terms of getting that alignment and management of expectations, and when we talk about how do we think that use case is going forward, we've got that reference. Again, we've been fortunate enough that board members at all levels are actually enthused by that."

Joining Lowthorpe in the discussion was ATO deputy commissioner and head of the Smarter Data Program Marek Rucinski who said data and analytics, business, and IT form a "triangle" where there is "always a push and pull between those three sides … and those three talking together is where the magic happens."

Where organisations have been successful, Rucinski explained, they had combined the various points of views from their respective data analytics, IT, and business arms to form a cohesive business strategy.

While Rucinski did not share how the ATO has dealt with changing its culture to align with this thinking, he did say the government organisation was working on processes that were not yet "front-line ready".

The focus for the ATO, according to Rucinski, will be implementing data analytics and AI to "enhance the human ability to make judgments" so humans can ultimately make the final decisions for matters.

Read: Predictions for 2019 in data, analytics, and AI

However, as AI, machine learning, and big data becomes increasingly used across organisations, Lowthorpe acknowledged that ethics must be maintained as a priority in any data-driven business strategy.

"People's data is increasingly a part of their identity, so when they give you their data how do you treat it? Do you treat it as though it is a part of them? Going beyond what the legislative requirements is something I think creates sort of a threshold for ethical standards … which is a really good mindset to have: are we protecting this asset in a way that customers want us to?"

University of Melbourne data strategy advisor Fiona Tweedie, who also took part in the panel, added that organisations should be active in interrogating the tools and data they use, taking into account the biases and assumptions that may arise.

"If we relied critically on large datasets, instead of removing human decision making and making decisions easier, sometimes you end up just reinforcing those biases."

Tweedie posed the ethical question of whether organisations are avoiding making assumptions on who the normal user is, emphasising that it is important to "[think] about who are the most vulnerable users and how could your project can affect them negatively".

"Having [data analytics] as a central responsibility is a good place to have your thinking happening, as it being lifted out from just being an operational issue, and makes it clear this isn't something that only IT needs to worry about," Tweedie said.

Predictions for 2019 in data, analytics, and AI

This year's round-up of predictions from industry figures yields wisdom in: AI, data regulation, data governance, the state of the Hadoop market, open source and "the edge."

The Rural Intelligence Platform uses artificial intelligence, machine learning, and cloud-based geospatial technology to give farmers the heads up on how their property is changing and is expected to change in the future.

How public utilities use analytics to improve interactions with customers (TechRepublic)

Big data and analytics are becoming mainstream and vital to business operations and customer relations. Here's a look at how modern tech fits into the customer service puzzle.

Data analytics are now an established, valuable tool for businesses, but the way they are used is rapidly changing. Here's how.