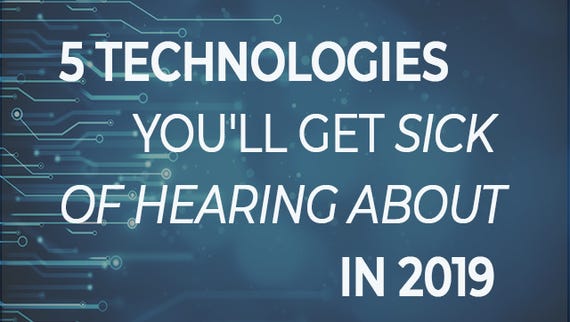 It's that time of year again. Before you open up the presents under the tree, I've got some geekier gifts. In response to execs and luminaries from across the world of data and analytics sharing their predictions for the next year, I've dutifully compiled and stitched them together.

Gather round, and soak up this year's batch, which focus on artificial intelligence, data regulation, data governance, the state of the Hadoop market, open source and "the edge."

Predictions about artificial intelligence (AI) are all over the map. They range from optimistic and starry-eyed to a bit more skeptical and jaded. For example, David Judge, SAP's Vice President of SAP Leonardo, Machine Learning and Intelligent Process Automation, sees a bright future: "In 2019, AI will continue to make our work lives easier, and allow us to accomplish more...Workers will choose to own certain tasks or delegate projects to the machine based on our preference."

But Talend's CTO, Laurent Bride, is a bit more sanguine, saying "Questions around data morality will slow innovation in AI/ML." Bride's point is that now that we're getting over our AI worship and are trying to make it useful, we are appreciating the moral and ethical dilemmas better. He believes that immediate innovation will pause (not sputter) "as researchers try to hash out a fair, balanced approach to machine-made decisions."

Maybe innovation will slow, but lots of our predictors believe Enterprise deployment of existing AI innovations will widen and deepen. Monte Zweben, CEO of Splice Machine says "Machine Learning will enter an operational phase, getting out of backroom experiments to move into the fabric of real-time, mission-critical, enterprise applications." Ketan Karkhanis, SVP and GM Analytics at Salesforce, believes "2019 will be the year when AI-led analytics (known as Automated Discovery) will become mainstream." And Vijay Rayapati, General Manager at Nutanix, explains "AI will go mainstream and will become the new API for developers as intelligence will drive the next wave of business software services to be autonomic."

Langley Eide, Chief Strategy Officer at Alteryx, used the following headline for one of her predictions: "Governance & Data Cataloging Become Key to Collaboration." Tomas Honzak, Chief Information Security Officer at GoodData, believes "Global Privacy, Regulation, and Governance will continue to keep security professionals up at night" and, with respect to GDPR's European pedigree, states that "The United States will continue to fall further and further behind in competency and international relations as our federal compliance efforts simply aren't moving fast enough to meet worldwide requirements."

That said, Talend's Bride, believes the US will get in the data protection game, saying "The 'G' in GDPR Will Soon Stand for "Global'" and goes on to explain how "California, Japan and China are already working on their own regulations to adopt rules similar to the EU's GDPR." Mike Puglia, Chief Product Officer, Kaseya, might agree, saying "we are seeing more worldwide regulations go into effect – GDPR being the big one." Puglia also sees compliance as a driver for more widespread data governance initiatives, which he sees as business-positive. His prediction headline is "As Compliance Grows, Data Governance Evolves to a Company-Wide Initiative."

But don't lock it up

But with all this compliance and governance work going on, what do we do to address this observation from Dr. Beverly Wright, Chief Analytics Officer at Aspirant?: "Companies articulate openly their need to shift their organizations' culture to become more data-inspired in decision-making related to strategic and tactical decisions. Now it seems they're starting to put initiatives in place to encourage this shift and move the environment along more quickly."

In furtherance of that sentiment, Frank Vella, Chief Operating Officer at Information Builders believes "Business sponsored data management driven initiatives will increase as organizations develop greater commitment to the data value chain for analytics use." And Snowflake's CEO, Bob Muglia, amplifies that thinking, asserting "2019 will be a tipping point for many companies. Those that adapt their business models, strategies and processes and become more data-driven will thrive, while many others will be disrupted and fall by the wayside."

So, how is it possible to reconcile the demands of compliance and leveraging the data value chain? Aaron Kalb, Alation's co-founder and VP of design and strategic initiatives, sees Chief Data Officers (CDOs) as the facilitators in this regard, predicting "CDOs will bridge self-service demands and governance goals," pointing out the importance of "bridging the self-service demands of the business with the governance goals of IT and legal departments."

Elephant in the container

With all this talk about grandiose concepts, what about some industry brass tacks, with respect to the technology stack? Readers will either feel vindicated or dismayed to hear the amount of bearishness going on with respect to Apache Hadoop. Splice Machine's Zweben says "new customer growth for Hadoop will dwindle and Hadoop clusters will slow in growth." Another CEO with a dog in the game, GoodData CEO Roman Stanek, says "The modern enterprise will continue to edge out technologies like Hadoop."

Yowza! Turns out the shiny new goodies are now container technologies like Docker and Kubernetes. Jack Norris, senior vice president, data and applications of MapR, says "2019 is the year containers and AI meet in the mainstream." Nutanix's Rayapati backs him up, saying "The digitization of enterprise will drive modern IT architectures powered by cloud, containers and micro services but also create new challenges in monitoring, management and governance for enterprises." (And there's that pesky governance thing again!)

What ties Hadoop, Docker and Kubernetes together, of course, is that they are all open source technologies, a subject on which our prognosticators had lots to say. Once again, I draw on Talend's Laurent Bride, who says "The market will double down on open source technologies" and who cites the Cloudera/Hortonworks merger as one of many mergers/acquisitions supporting this view. (As an aside, GoodData's Stanek sees that same merger as a negative indicator of sorts, saying the deal "was a first look into the projected value for Hadoop in 2019."). Tomer Shiran, co-founder and CEO at Dremio, opines on open source as well. "Using open source projects, open standards, and cloud services, companies will deliver their first iterations of Data-as-a-Service to data consumers across critical lines of business" he believes.

Also: Can humans get a handle on AI?

There's some pessimism around all this OSS popularity, too, though. Karthik Ramasamy, founder of Streamlio, which ties together open source technologies Apache Pulsar, Heron and Bookkeeper, thinks "Tensions will simmer as major cloud platform vendors make more moves to co-opt the open source ecosystem." Ramasamy goes on to explain that "big cloud providers will undermine open source communities and vendors by launching their own closed cloud services based on open source without contributing back to those communities." And while he does cite a case to the contrary, he still cautions that "the extent to which these companies act as 'good citizens' within open source will bear watching."

Please push me close to the edge

With apologies to Grandmaster Flash, there's lots of chatter around "the edge" in this year's predictions. Essentially, "the edge" refers to compute capabilities, especially around the Internet of Things (IoT) and AI, far away from the cloud, and out into the field, where sensors roam. It's the PC revolution, redux.

Addressing Industrial IoT (IIoT), Sastry Malladi, CTO of FogHorn, says "As IIoT projects pivot away from cloud-centric approaches, the next step in the evolution of artificial intelligence and IIoT will address the need to convert algorithms to work at the edge in a dramatically smaller footprint." And Stephan Ewen, co-founder and CTO of Data Artisans, the startup formed around streaming data technology Apache Flink, says "Stream processing will be used as an efficient way to realize 'edge computing.'" because it's "a great match both for pre-processing data on devices or gateways, and for running event-driven logic on the edge."

Also: AI: The view from the Chief Data Science Office

MapR's Norris explains that "2019 will see the pendulum shift to a focus on performing analytics at the edge." Norris further expounds: "Cost drivers for this trend are bandwidth (semi-connected environments as well as expensive cellular) considerations and storage (reduce the amount of data sent to the cloud)."

All in a year's work

It will be instructive to see how much progress we make on these predictions next year. But the triple focus on AI, governance and compliance will shape much of what happens. Stock market turbulence and the glut of vendors may have impact as well. I expect significant Enterprise initiatives and spending on analytics and AI, along with much higher standards around the efficacy of, and return on, those investments. 2019 will hopefully be the year the industry delivers there.

Join Discussion for: Predictions for 2019 in data, analytics,...