Whatever happened to Cortana? Think corner office and a hefty raise

Once upon a time, Cortana was going to be Microsoft's answer to Siri and Alexa. The dad jokes are still there, but Cortana has a new job these days, and it's all tied to Microsoft 365.
Written by Ed Bott, Senior Contributing Editor on June 11, 2020 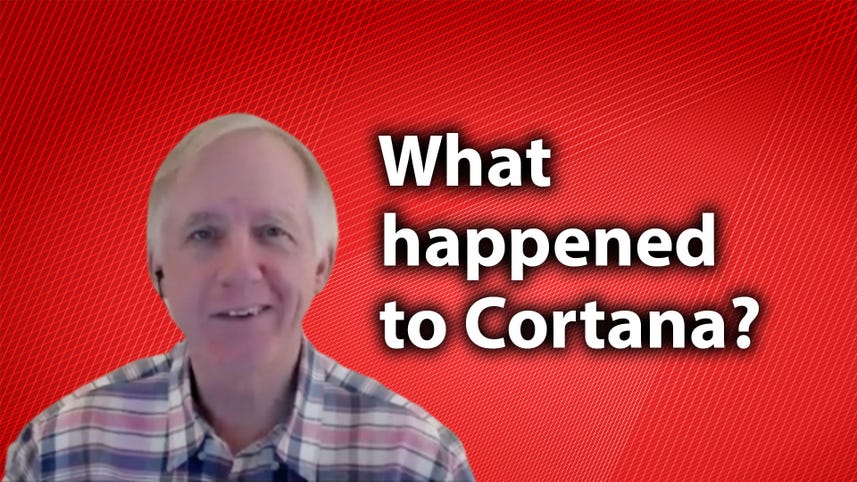 Make the most of your 365 with premium Office apps, extra cloud storage, advanced security, and more. See plans and pricing at Microsoft.com

Five years ago, Cortana was going to be Microsoft's answer to Siri and Alexa, an AI-powered personal assistant capable of responding to voice commands, armed with a collection of third-party skills and a notebook filled with your personal preferences. Oh, and a fearsome collection of dad jokes.

Today, if you click the Cortana button on a Windows 10 PC, you still get the "Ask Cortana" prompt, and you can click the microphone button to start talking. But saying "Hey Cortana" does nothing. All those third-party skills are no longer operative, and Cortana's notebook has officially been tossed into the digital dumpster.

It's 2020 and time no longer has any meaning, but even so I was surprised when I fired up the Internet Archive's Wayback Machine and looked at Microsoft's official page for Cortana from just one year ago. In early 2019, Microsoft was still (at least officially) optimistic about its virtual assistant.

This was the headline: "Cortana. Your intelligent assistant across your life." The copy on the page emphasized that "Cortana helps wherever life happens. She works with everything from your calendar to your music and smart home services."

Also, "Cortana has skills and she uses them to help you." I mean, just look at all these third-party skills for music services, home automation, and ... insurance?

Check out these before-and-after shots from Cortana on a PC running Windows 10 version 1903 and from a just-upgraded installation of version 2004.

If you look closely, you can see exactly what happened. Cortana got recruited for a corporate job.

On the Cortana page today there's a very different headline: Cortana is "Your personal productivity assistant in Microsoft 365," and the tasks are no longer about music and fitness and home automation. Instead, the skill set includes things like catching up with your email, coordinating meetings, and filing expense reports.

Microsoft has been telegraphing this change for the past year, but it's still jarring to see a Windows 10 feature transformed so completely, so quickly. And in true Microsoft fashion, the formal announcement was inserted casually into a support article (updated May 28) titled "Features and functionality removed in Windows 10."

Cortana has been updated and enhanced in the Windows 10 May 2020 Update. With these changes, some previously available consumer skills such as music, connected home, and other non-Microsoft skills are no longer available.

In fact, if you look through Microsoft Docs you can find a treasure trove of enterprise-related Cortana documentation. Those pages specifically refer to Cortana versions before Windows 10 version 2004 as "legacy versions" and emphasize that "Cortana's approach to integration with Microsoft 365 has changed with Windows 10, version 2004 and later." It also makes very clear that the experience is designed for use with Azure AD:

Your organization must have an Azure AD tenant and your employees' devices must all be Azure AD-joined for the best Cortana experience. (Users may also sign into Cortana with a Microsoft account, but will not be able to use their enterprise email or calendar.)

And for those who are administrators of a Microsoft 365/Office 365 enterprise subscription, Cortana is about to begin sending daily emails to your users. I received an email just this morning from cortana@microsoft.com. "We're giving you a sneak peak [sic] of the Briefing email," it announced.

As an IT admin, you're getting a two-week preview to experience the value of the Briefing email before it's released to your organization.

Every workday, you'll receive an email that surfaces important items related to the day ahead. This preview will help ensure you're familiar with the experience when it's rolled out to your colleagues.

Those daily emails are designed to locate related documents and emails directly from your corporate account related to upcoming meetings and commitments. You'll also get a chance to "dedicate time on your corporate calendar to work on outstanding tasks and prepare for meetings without interruption," the announcement says.

None of this should be a surprise, of course. I wrote about Microsoft's steady retreat from consumer products and services more than two years ago, and this is just another mile marker along the way.

Cortana started in 2014 as a mobile play, an answer to Siri. With the demise of Windows Mobile, that initiative became a nonstarter, and without devices in the home to compete with Amazon's Alexa-powered Echo devices and Google's Nest family, Cortana was doomed to be a distant third at best. Refocusing the service on corporate customers who pay for each user's account is in line with everything else Microsoft has done in recent years.

I am certain Cortana got a hefty raise along with that corner office in corporate HQ. If Microsoft really can fine-tune the AI behind Cortana to make it really, really good at scheduling meetings and sifting through email in search of stuff that matters, the corporate world will pay big bucks for that.

Meanwhile, when Microsoft finally reinstates support for the "Hey Cortana" wake word, go ahead and ask your assistant for help. Just don't be surprised if you get an OOF message.