Five-or-so years ago, sustainability was a common theme for CIOs and tech suppliers, but it's now something that is rarely heard about.

So is it simply that the fashion has changed and the emphasis has moved onto new hot topics, or has the agenda of tech chiefs and tech vendors shifted so that green IT is no longer a relevant issue?

Ashurst LLP CIO Bruna Pellicci says that technology is now inherently greener. Awareness has grown, too. A raft of regulations means that, in many cases, green IT has become subsumed within broader best practice.

"When it comes to acting in an environmentally-sensitive manner, executives simply have to act green," she says. "It's become natural - great business is all about acting in the most efficient manner possible." 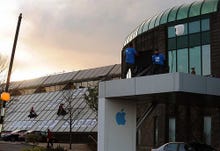 Apple discloses more details on green data center plan Renewable energy technology constructed by Apple will contribute about 60 percent of the power needed by its facility in Maiden, N.C.

Ian Cox, a former CIO turned consultant at Axin, agrees that most businesses now see sustainability as accepted best practice. At the same time, he says the focus on green IT issues has definitely reduced - something that might cause unease for those who believe in sustainability as a necessary business objective.

"Green IT was a fad," he says. "Boards probably aren't as interested, but companies are now much more sustainable than they were five or ten years ago. Green IT has become more embedded in good business practice."

For reference, Cox points to changes in the way that businesses procure and use IT. He says internal data centres used to be a key concern for IT managers dealing with green IT. The move to the cloud during the past five years has reduced a great deal of the pressure for sustainability.

"By going on-demand, CIOs have reduced their internal data centre operations and outsourced many of their green concerns to providers," says Cox. "In many cases, targets for sustainability will be part of the contract and providers will be expected to comply."

Abi Somorin, senior IT manager at beachwear retailer Orlebar Brown, agrees that the move to on-demand has changed the way firms procure IT and, in effect, how they think about sustainability. He says his firm does not have an explicit strategy for green IT. "I don't think it's ever really been factored into the equation because our business has always been cloud-based," he says.

His approach suggests - once again - that many of the responsibilities for sustainability have been pushed from end user to supplier. "It's not happened directly; it's happened by design - it's just the way that the industry has developed," says Somorin.

Business matters when it comes to caring for the environment

Said Business School CIO Mark Bramwell says the standalone concept of green IT started to get lost as sustainability was over-hyped by IT marketing executives and green became accepted as a standard business practice. Like some of his other peers, he believes the concept of sustainability has been subsumed into the concept of forward-thinking technology leadership.

"Much of what we used to see as green IT is now accepted as common sense," he says, referring to concerns like the ethical sourcing of materials. Ethics, however, are not the only concern. The economic downturn, says Bramwell, was also crucial in terms of CIOs attempting to create business cases for their technology initiatives, especially in terms of sustainability.

"As economic conditions altered, green IT was no longer necessarily seen as best value. In fact, there are cases where businesses could sometimes be charged a premium for sustainability. But good IT departments don't re-invent the wheel. If someone else is doing something better than you, you're not scared of using his or her technology," he says.

"When I was CIO at the Wellcome Trust, we examined our use of technology in regards to sustainability on a regular basis. What we found as time moved on was that a large majority of our IT kit was green. Sustainability concerns started to be written into policy and major providers had to fulfil their obligations in regards to sourcing and recycling components."

It, therefore, seems as if a confluence of factors - the rise of cloud computing, the governance placed on providers, and the change in economic conditions - have helped to push green IT into the background. In fact, Andrew Donoghue, European research manager at 451 Research, doubts whether green IT was, in fact, ever relevant at all.

He says 451 Research has always avoided using the term 'green' in reference to sustainable technology. He says the researcher prefers the term 'eco-efficient IT', where eco refers to 'economical' foremost, but with some 'ecological' benefits.

"Asking 'whatever happened to green IT' is a bit like asking whatever happened to the Loch Ness monster," he says. "The truth is it never really existed, apart from a few unsubstantiated sightings. True green IT means building or managing IT in a way that is environmentally altruistic, no matter the cost to the business; effectively incurring costs in order to minimise environmental damage."

The reality, says Donoghue, is that most examples of so-called green IT were, and are, about capital or operating cost reduction. For senior executives, it just so happened that some of these measures could be spun as having environmental benefits as a by-product.

He says that even high-profile examples - such as Google's and Apple's multi-billion dollar investments in renewable energy for their data centres and offices, which have significant upfront costs - are expected to result in long-term savings as the cost of fossil fuel increases over time.

"Those deals also have payback in terms of tax incentives, marketing benefits, and potentially mitigating against future carbon regulation," says Donoghue. "So green has always been a pretty meaningless term. It's really always been about efficiency and effectiveness of IT development and management."

Join Discussion for: Whatever happened to green IT?