More details are emerging about Apple's third iPad as teardown specialists analyse the parts, and it's beginning to look like a bit of a stopgap product. The pre-launch speculation provided a pretty good idea of the improvements that Apple would introduce, mainly a "retina" display screen, a faster processor, support for 4G mobile networking, and possibly the voice-driven Siri assistant.
Written by Jack Schofield, Contributor on March 21, 2012

More details are emerging about Apple's third iPad as teardown specialists analyse the parts, and it's beginning to look like a bit of a stopgap product. The pre-launch speculation provided a pretty good idea of the improvements that Apple would introduce, mainly a "retina" display screen, a faster processor, support for 4G mobile networking, and possibly the voice-driven Siri assistant. But the improvements Apple has delivered, while useful and free, leave something to be desired, and Siri is entirely absent. iPad users will probably have to wait for next year's model to have these innovations implemented to their best effect.

The main selling point of the new iPad is the high-resolution screen. Apple has simply doubled the specs (and quadrupled the resolution) from 1024 x 768 pixels in the iPad 2 to 2048 x 1536 pixels in the New iPad. This makes it easy to run today's software by replacing one pixel with four pixels, pending the arrival of more apps that support the new resolution.

There's no doubt that it's an excellent screen. Indeed, DisplayMate's New iPad Display Technology Shoot-Out says: "the new iPad’s picture quality, color accuracy, and gray scale are not only much better than any other Tablet or Smartphone, it’s also much better than most HDTVs, laptops, and monitors. In fact with some minor calibration tweaks the new iPad would qualify as a studio reference monitor." This makes it suitable for professional photographers, medical imaging and similar applications.

But there are some drawbacks. The New iPad still has an amorphous silicon TFT screen, not a (more expensive) low temperature polysilicon screen like the iPhone 4. Also, according to DisplayMate, the New iPad "uses 2.5 times the backlight power of the iPad 2 for the same screen brightness," but the battery is only 1.7x larger. This reduces battery life, and DisplayMate says it ran for 5.8 hours on maximum brightness, 20 percent less than the iPad 2’s 7.2 hours.

Because of the new screen, the New iPad is also slightly thicker, heavier, and runs hotter.

It would have been better to use a screen based on Sharp’s IGZO (Indium Gallium Zinc Oxide) technology, and this idea was rumoured before the launch. Sadly, these screens were not available in large enough quantities at low enough prices to make the New iPad, but they may appear in the next one, next March.

The New iPad clearly needed a faster processor and more memory than the limited iPad 2, and it got them. However, the new A5X chip isn't really faster than the old A5. The main improvement is the inclusion of extra graphics cores to cope with the screen's quadrupled pixel count, but the chip is still made by Samsung on its 45nm fabrication process, just like the old A4. As photos at Chipworks show, the die size has therefore exploded from the A4's 53.3sqmm to 122.6sqmm in the A5 and 165sqmm in the A5X.

Apple's failure to move to a newer process technology has saddled the New iPad with a lumbering monster of an SoC (system-on-a-chip), around twice the size of Nvidia's quad-core Tegra 3. That means it will cost roughly twice as much to manufacture.

Some pre-launch rumours had suggested the New iPad's SoC would be fabricated on a 32nm or possibly a 28nm process. (Intel's low-power Atom is at 32nm now and is heading for 22nm.) This kind of "die shrink" would have meant Apple's chip ran faster, used less power, and was cheaper to manufacture. Again, it looks as though iPad buyers will have to wait for the next version of the SoC, probably next year.

Finally, there's the inclusion of LTE in some New iPad models. This works with the AT&T and Verizon mobile phone networks in the US, which have different implementations of LTE. However, it doesn't work in the UK, where the frequencies are different (800MHz, 1800MHz and eventually 2600MHz versus 700MHz and 2100MHz in the US), or in many other places. Apple may be touting the fact that the New iPad has ultrafast LTE broadband, but unless you live in North America, it's unlikely to work. Ever.

Apple, of course, loves to launch a new iPad at this time every year: it provides a huge boost to sales and puts more billions of dollars in its already overflowing coffers. Apple says the New iPad sold 3 million units in its first three days. It obviously wouldn't want to wait for IGZO screens and 28nm processors, and possibly for better LTE support, when it could deliver more immediate improvements.

Also, to Apple's credit, it has delivered these improvements at no cost to the buyer. The company has swallowed the significantly higher cost of the processor, extra memory, screen, and larger battery, which will presumably have some impact on Apple's profitability. (For a guide to the increased costs, see HIS iSuppli's table below.)

Either way, I'm sure buyers who were happy with their original iPad, the iPad 2 and New iPad will be happy to buy another model next year. And next year's New New iPad should actually deliver the new technologies that some people wished for this year. 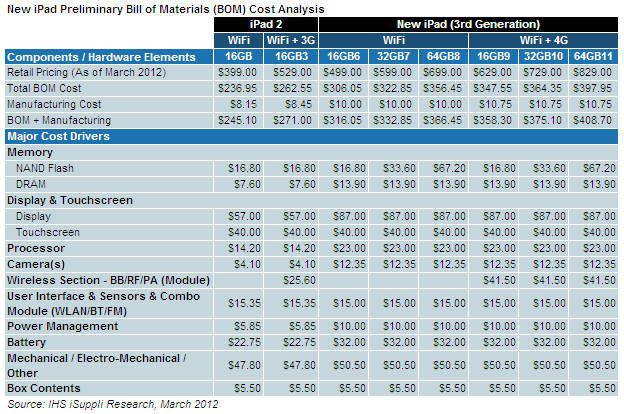 This iPad Air just dropped by $100 while supplies last