Full Bio
Posted in Between the Lines on November 14, 2014 | Topic: Enterprise Software

You might be forgiven for thinking Google Glass was a mere blip on the landscape of recent history.

Almost nobody has heard of anything Glass, or Glass-related, for months, so some are questioning whether or not the wearable still exists — or if it has a future. 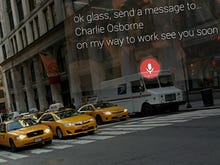 According to a Forrester survey, more than two-thirds of information workers have heard of Google Glass. But only 4 percent of those workers have seen Google Glass in person. That data may be enough to conduct a few corporate experiments.

I'll admit this. The last time I picked up my Google Glass (I bought one, color me naive) was this past weekend, in fact, whule moving. I didn't even take it out of its protective case. It was packed, moved, and unpacked — well, as much as one can unpack during a busy working week.

The question stands. Where is Glass? And what is its status?

Reuters asked that same question on Friday. Even glasshole-in-chief Sergey Brin, once the poster child for the wearable computer, was spotted sans device. (He recently wore it to the beach, but not the media event.)

Long gone are the days where he donned the device on the busy New York City subway? Perhaps so.

Google Glass first arrived on the scene about a year-and-a-half ago, but has since been left to publicly pasture . Despite the initial troubles with battery life, a lack of apps, and even arriving to testers and developers without a particular pain point to solve, it was nevertheless widely lauded as the first major mainstream break into wearable technology.

Jump to today, and every company and their friends (and rivals) are developing wearable devices. As most of the current wearables are wrist-bound, those are solving the health and fitness conundrum. Tie it in with cloud-based services and data analytics and you have a number of comprehensive healthcare monitors at your disposal.

Google Glass, in its current form, still doesn't achieve anything. Although it has in some vertical industries, like healthcare and construction, provided eyes and ears for those who cannot be there in person.

But without a clear and public agenda, direction, and roadmap for developers, which have in recent years been the driving force to most smartphone platforms, Google Glass seems destined to die a quiet death.

According to Reuters, more than half the developers it surveyed who were working on applications for Glass have since abandoned their projects, citing a lack of customers or current limitations with the device. Alarm bells recently sounded when earlier this year Google Glass creator Babak Parviz, who also headed up Google's secretive X division tasked with creating self-driving cars and other new-age technology, left the company for rival Amazon.

But though ideas alone can't be killed, Glass is now a prototype in its own right. The head has been detached from the body, and the brains have been removed from the operation — literally.

Can the Glass project survive? Google thinks so. (Of course it would.)

Google Glass head of business operations Chris O'Neill told Reuters that the company is "as energized as ever about the opportunity that wearables and Glass in particular represent."

ZDNet's questions to Google went unanswered at the time of writing.

Maybe it's just a quiet patch. Maybe there's nothing to worry about. But if the developers aren't there, Google's own development of Glass will be stunted. It is, after all, the developers that provide half the innovation and ideas.

The end of the year is just around the corner. Google's Brin wanted a 2014 launch, which is looking ever unlikely to be the case. It's more likely that any substantive news will arrive next year at the earliest.

Wherever Google Glass is, it's not dead — yet. It's future, however (and unfortunately), remains unknown.

Join Discussion for: Where did Google Glass go?