Microsoft's ambitious plan to develop its own line of personal computers had an awkward beginning, but the division hit its stride with the launch of the Surface Pro 3 in 2014 and has not looked back since then.

Today, you can choose from a half-dozen different portable PCs under the Surface brand, and that doesn't include related products like the Surface Studio desktop, the corporate-focused Surface Hub, the Android-powered Surface Duo 2, and an assortment of keyboards, mice, docking stations, and other peripheral devices.

In an online event on September 22, 2021, Microsoft rolled out arguably its biggest upgrades to the Surface line ever, with a sweeping refresh of the flagship Surface Pro and a brand-new model, the Surface Laptop Studio. The new models, most of them sporting 11th Generation Intel Core CPUs, are all ready to ship with Windows 11 when the new operating system is released to the public on October 5.

That is all undoubtedly true, but it's also turned into a steady source of revenue in Redmond. In the fourth quarter of calendar year 2020, for example, Gartner estimates that Microsoft shipped more than 1 million Surface PCs in the United States alone, and the company reported more than $2 billion of worldwide revenue from the Surface division. That should safely set aside any concerns that the company is going to get out of the PC business anytime soon.

Surface PCs are, without a doubt, premium products, sold at a premium price. We've tried every model in the lineup and can attest to the quality of design and construction. But the ever-expanding roster of products under the Surface brand umbrella can make it difficult to sort out which one is a fit for your work requirements and budget.

That's where this guide comes in. We've taken a close look at each of the six current members in the Surface family of portable PCs to help you decide which, if any, should be on your short list when it's time to purchase a new PC.

Note this post concentrates on the portable PCs in the Surface lineup. It doesn't include the desktop Surface Studio, the Surface Hub, or the Android-powered Surface Duo. 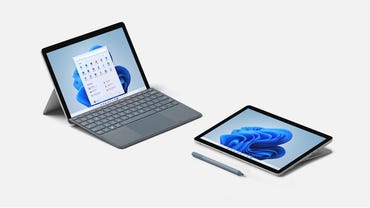 The oldest surviving member of the Surface family has been around for nearly nine years, with an external design that has remained remarkably consistent in recent years. That's not a criticism of the Surface Pro. Instead, it's the result of Microsoft's wise decision not to tamper with a design that works. The Surface Pro 8 gets three noteworthy design tweaks: a larger screen (with smaller bezels to fit in the same housing as earlier models); a new Signature keyboard designed to hold the new Surface Slim Pen 2; and a second USB-C port where the USB-A port used to be, with both ports supporting Thunderbolt 4.

The Surface Pro is right for you if ...

Pricing: The Surface Pro 8, available in consumer channels now, includes Intel 11th Generation Core i5 and i7 CPUs. The entry-level model model equipped with 8GB of RAM and a 128GB SSD for $1099; you can max out with 32GB of RAM and 1TB of solid-state storage for a cool $2600. The Surface Pen and Type Cover are extra-cost options. Commercial models with LTE connectivity will be available in 2022, Microsoft says. 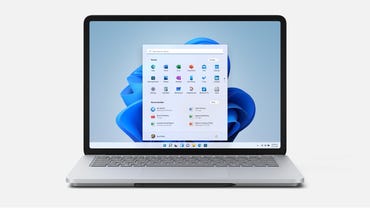 Of all the announcements in the September 2021 Surface event, the debut of the Surface Laptop Studio might be the most interesting. This hybrid device replaces the Surface Book as the logical option for demanding PC users (think graphic designers and developers) who want maximum performance (including discrete GPU support) as well as a way to draw and sketch with a Surface Pen, but without the detachable Type Cover of the Surface Pro.

The clever fabric hinge in the Surface Laptop Studio allows the display to slide forward so that it covers the keyboard at an angle that's made for presentations or gaming with an external controller. Push a little more and the display slides into studio mode for use with the new Slim Pen 2. (The pen has its own holder/charger under the front of the keyboard.

Like the Surface Pro 8, this new laptop includes 11th Generation Intel Core processors (i5 and i7) with a pair of USB Type-C ports that support Thunderbolt 4. The 14.4-inch touch display can work at a 120Hz refresh rate. Configuration options allow you to bump the standard 16 GB of RAM to 32 GB,  and a 2 TB high-performance SSD.

The Surface Book Laptop Studio might be right for you if ...

The Arm CPU inside means some compatibility headaches 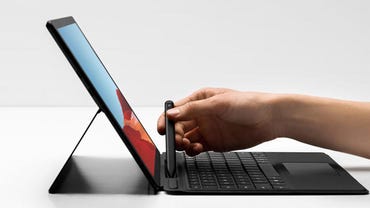 Look at the Surface Pro X (a 2020 release) and you can see where the Surface Pro 8 got its design inspiration. It has the same larger screen, albeit in a thinner package with rounded edges on the tablet portion. It has two USB Type-C ports (but no Thunderbolt support. The pen (still optional, still an extra cost) has the same shape as the new Surface Slim Pen 2, with its own dedicated slot in the Type Cover.

And inside, the biggest difference of all is the custom Microsoft-Qualcomm Arm CPU, which is powered by Windows on Arm. For 2021, Microsoft added a new, lower-cost model without Gigabit LTE support.

The Surface Pro X is right for you if ...

Pricing: Surface Pro X comes in a range of configurations that start with a respectable $900 entry-level device (Wi-Fi only) and top out at $1800 for a model with 16 GB of RAM, LTE support, an SQ2 CPU, and 512 GB of storage.

It’s a traditional laptop with a Surface logo 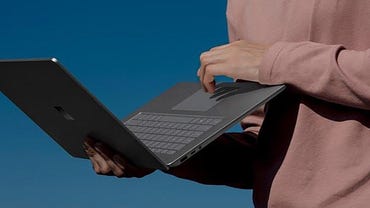 At first glance, the Surface Laptop is an awkward fit in Microsoft's hardware lineup. It's not a two-in-one design, like all of its brandmates. Nor does it fit with the "We're just trying to show our OEM partners how to innovate" message that Microsoft occasionally uses to justify competing with its OEM partners.

And yet, here we are with a conventional laptop design that has the Surface logo attached to it, in both 13.5-inch and 15-inch display sizes. The brand-new Surface Laptop 4 includes 11th-generation Intel Core or AMD Ryzen Mobile processors. (It wasn't given any updates as part of the 2021 refresh.)

Make no mistake, this is a fine piece of hardware, especially with the Alcantara keyboard enhancements. We won't blame or shame anyone who chooses this traditional design.

The Surface Laptop 4 is right for you if ...

Pricing: Like the Surface Book line, the Surface Laptop models start with a reasonably powerful entry-level configuration and scale up to a maxed-out model with 32 GB of RAM and a 1 TB SSD at a (relatively) reasonable $2400.

Smaller, lighter version of the Surface Pro, with LTE options 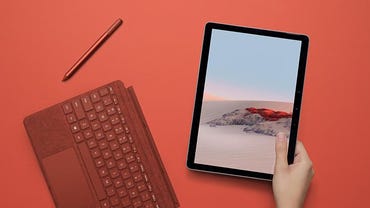 Physically, the Surface Go is tiny, like somebody shrunk a Surface Pro. It has the same kickstand as its older sibling, albeit slightly smaller. It has a similar Type Cover, which is also shrunken to fit the 10.5-inch, Full HD display. And it definitely has a smaller price tag than the Surface Pro.

This is no cheap knockoff, though. The Surface Go 3 (identical to its predecessor but with a new, faster CPU option) has a full complement of premium features, including an infrared camera that supports Windows Hello facial recognition, a backlit keyboard on the Type Cover, and LTE options that reinforce the Go part of the name.

Pricing: We don't recommend the $400 base configuration, which has a mere 4 GB of RAM and a paltry 64 GB of eMMC storage. More acceptable configurations range from $550 to $630, and don't forget to add $100-130 for the Type Cover. Note that LTE-equipped models preloaded with Windows 11 are not yet available; Microsoft says they're "coming soon." 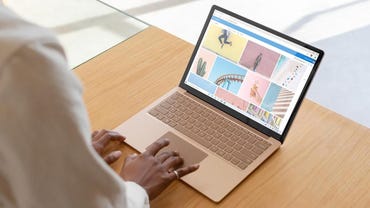 In the Surface brand, Go apparently means "smaller, lighter, and less expensive," which is how this laptop compares to its larger sibling. It has the same build quality as the bigger members of the family, and body options include Platinum, Sandstone, and Ice Blue. All models include a 10th Generation Core i5 CPU and a 12.4-inch display with a native resolution of 1536 x 1024. Higher-priced models include a fingerprint reader integrated into the power button.

It uses the same Surface Connect port as other Surface models and also includes a USB Type-C port. You can use either option to connect the laptop to a desktop docking station.

The Surface Laptop Go is right for you if ...

Pricing: As with the Surface Go devices, the $500 base configuration is a little underpowered, with only 4 GB of RAM, 64 GB of eMMC storage, and no fingerprint reader. The 8GB configurations, with 128GB or 256GB of SSD storage, are a better long-term value at $700 and $900, respectively.

Which Surface devices will run Windows 11?

Microsoft's hardware requirements for Windows 11 apply to Surface devices just as they would to any other PC maker. That means most devices designed and built in 2019 or later will work with Windows 11. The list includes the Surface Pro 6 and later, Surface Book 3, Surface Studio (desktop), Surface Studio Laptop, Surface Laptop 2 and later.

All of the models that Microsoft announced in September 2021, including the Surface Pro 8, Surface Go 3, and Surface Laptop Studio, include Windows 11 out of the box. Earlier models ship with Windows 10 and qualify for a free upgrade to Windows 11.

Also: Windows 11 FAQ: Release date, requirements, price -- plus when and how to upgrade

Which Surface device has the best battery life?

In the real world, measuring battery usage is an individual exercise, dependent on your work (and play) patterns as well as intangibles like the quality of your network connection. If we were placing bets on which models would win a Last Laptop Standing competition, we would push most of our chips onto the new Surface Laptop Studio, which has a massive 58 WH battery commensurate with its hefty dimensions. Microsoft claims that the Core i5 model can get up to 19 hours of "typical device usage," with the Core i7 model rated for only an hour less.

But we would also take a long look at the Surface Pro 8, which weighs about half of the Surface Laptop Studio and Microsoft has a smaller battery but still has a 51.5 WH battery. Microsoft claims it's capable of squeezing out 16 hours of "typical device usage." And, of course, the Surface Pro X, with its Arm processor, was made for long running times. Microsoft claims it can go for 15 hours, but in the real world (where usage is never even close to those optimistic numbers) it might prove hardiest.

Do I have to use Microsoft's charger to power a Surface PC?

The blade-shaped, magnetically attached Surface Connect is the universal default for connecting chargers and external devices like docking stations to any Surface device made in the modern era. But if your Surface device has a USB Type-C connector (as most models built in 2019 or later do), you can use any charger that delivers sufficient wattage over a USB-C Power Delivery (PD) cable.

In fact, even if your device doesn't have a USB-C port, you might be able to use a generic USB-C PD charger with the help of an adapter cable that has a USB-C connector on one end and a Surface Connect blade on the other.

The latest 2021 models (Surface Pro 8 and Surface Laptop Studio) include not one but two USB-C ports that support Thunderbolt 4. You can use those ports for power or for high-speed, high-bandwidth connections to Thunderbolt docking stations and external devices.