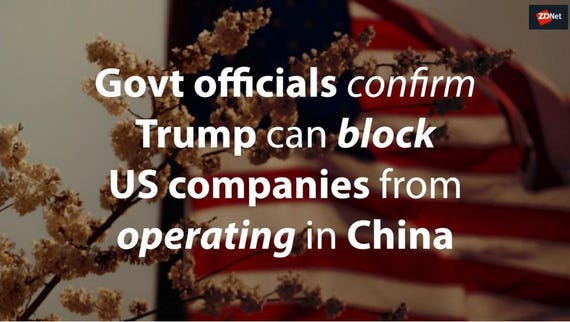 Two White House officials confirmed that President Donald Trump has the power to force US companies to move their operations out of China, but clarified that no official order has yet been made by the US government.

"There's nothing right now in the cards. Ultimately we do have such authority but it is not going to exercised presently," White House economic director Larry Kudlow told CNN on Sunday.

"What he is suggesting to American businesses and it's something he's said to many different companies in many different forms and many different occasions -- you ought to think about moving your operations and supply chains away from China and secondly, we'd like you to come back home."

Treasury Secretary Steven Mnuchin shared similar comments to those made by Kudlow in an interview with Fox News Sunday, saying the president has "lots of options".

The clarification of the US president's scope of powers were in response to a series of tweets made by Trump on Friday. In raising the possibility of an American withdrawal from China on Friday, Trump had framed the idea as an order rather than a request for companies to make preparations in the event of a prolonged trade war.

"Our great American companies are hereby ordered to immediately start looking for an alternative to China, including bringing your companies home and making your products in the USA."

"For all of the fake news reporters that don't have a clue as to what the law is relative to presidential powers, China, etc., try looking at the Emergency Economic Powers Act of 1977. Case closed!"

See also: Trump to impose tariffs on $300b of Chinese goods from September

According to the White House officials, the ability to force US companies to move their operations and supply chains from China would fall under the scope of the Act.

Under the Emergency Economic Powers Act, the US president has the power to regulate the commerce of US companies if a national emergency is declared against an "unusual and extraordinary threat". This would trigger a special authority for the president to regulate "any transactions in foreign exchange" by Americans.

While Trump has ordered various tariffs against China during the trade war, he has yet to declare a national emergency in respect to Chinese trade.

The US also accused China of being a currency manipulator earlier this month.

Tariffs on imported Chinese products cost the US tech industry $1.3 billion in May 2019 alone, according to data from the Consumer Technology Association -- and the cost is expected to grow.

Apple CEO Tim Cook made a "compelling argument" that the US China tariffs hurt it more than Samsung, according to US president Donald Trump.

US tariffs on laptops and phones pushed out until December

Tariffs on $300 billion worth of Chinese imports split into two tranches.

Huawei is squeezing Apple's iPhone out of the Chinese smartphone market.

Despite some countries' reservations about Huawei, Greece is busy running 5G projects with the Chinese giant.

Join Discussion for: Govt officials confirm Trump can block US...