Who do I pay to get the 'phone' removed from my iPhone?

The phone bit is the most useless bit of my smartphone.
Written by Adrian Kingsley-Hughes, Contributing Writer on April 12, 2021 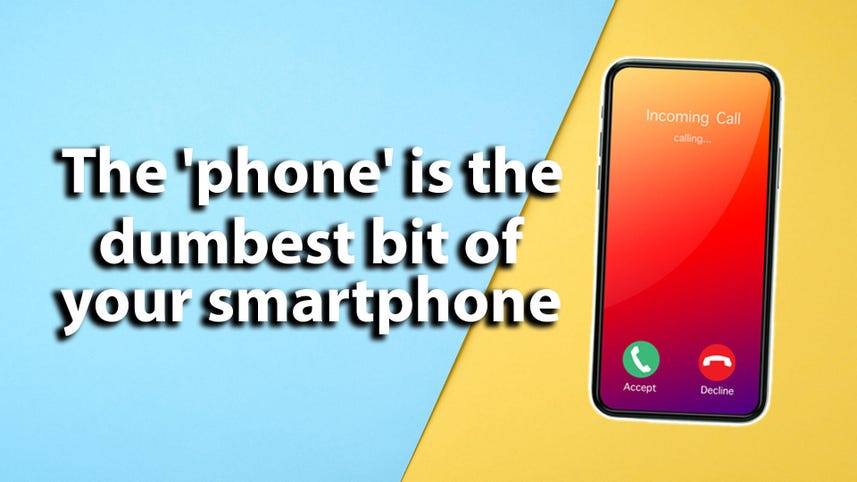 The smartphone is the ultimate convergence device. It takes a number of useful gadgets and combines them into a single, portable device. A smartphone can act as your portable computer, navigation device, camera, music player, and much more.

It's also a phone.

And the phone is the most useless bit.

Calls are a wasteland. Pretty much every time I hit that green button on a call from someone who isn't in my contacts, I end up regretting it.

And folks on my contacts list know not to call me.

A quick look through my calls list for the past year shows little more than scams, timewasters, nonsense, and garbage. Perhaps one percent was useful, but again, could have been a message.

The phone is a device from a different era. While the device itself has changed, it retains the worst of its original qualities -- a device that emits an annoying noise and demands immediate attention.

You could argue that text messages and emails are the same, and you'd be right. The difference is that these technologies have evolved a bit in order to try to remain relevant and useful.

That said, I'd happily ditch text messaging because the signal-to-noise ratio is very poor there, too.

Maybe something could be done to make calls and texts a bit better. Visual voicemail on the iPhone has made this feature a tiny bit more bearable. Maybe something along the lines of Sign in with Apple ID, where I have the option of hiding my true phone number and use disposable ones that I can manage -- and by manage, I mean block -- down the line.

Now, I'm not suggesting that Apple and Google rip the phone part out of their smartphones. Some of you still use the phone and text messaging. What I'm asking for is a way to kill both of them.

I don't know about you folks, but I could live without them. I'd even pay to have a smartphone that does everything a smartphone should do except be a phone.

Let me know what you think in the comments below.