It's hard to fully appreciate the value that Amazon's Web Services, the company's cloud services operation, provides to customers until you look at one specific example: Netflix. 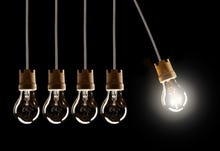 Why Amazon is the king of innovation: Kindle's clout Amazon is far more innovative than Google, Apple - or any other tech company in existence. Here's why.

According to TIME Magazine, Netflix users consume more than a third of all Internet download traffic during peak hours. Amazon, on the other hand, now offers four times as many movies as Netflix. In the area of streaming video services, Amazon and Netflix are clearly direct competitors.

Keep that in mind for this next fact: Netflix has spent the last seven years moving onto (not away from) Amazon's Web Services. Netflix has been migrating as much of its on-premises operations as it can to AWS, even though Amazon is a direct competitor to Netflix' primary income source. Netflix, as far back as 2006, knew Amazon was offering a competing video streaming service, and still undertook the effort to migrate to AWS.

No company, especially one as smart of Netflix, would do that unless the value proposition was huge.

AWS fundamentally changed the way IT operates. I'll give you a personal example. Back in 1997, when I started ZATZ online, we had to buy our own hardware, and run dedicated lines into our building to run our servers. It was hugely expensive.

When traffic grew, we had to make large, chunky capital expenditures to buy more servers to serve more visitors. That wasn't a small project. By the time I retired from the web publishing business, we had served 2.6 billion webpages and sent out 740 million email newsletters.

The infinitely scalable resource that is AWS wasn't available, so we had to overbuild to manage surges. Then that money was spent, and locked into the hardware. There was no way to handle unexpected surges in traffic.

If we thought we might get a surge in traffic the only way to handle it was to predict it well in advance and then spend up to buy additional, permanent capacity. Were we to have had AWS, we would have paid for the traffic for the one day, and not a penny more.

ZATZ was profitable, but had AWS existed in the early 2000s, it would have transformed our cost structure.

What AWS (and, now, other competing infrastructure as a service operations) did was turn IT from a capital expense (CAPEX) to an operational expense (OPEX). Not only did this have a profound impact on cash flow, it also changed everything from expense management to tax structure because CAPEX must be amortized over years, where OPEX can be deducted in the year incurred.

For Amazon, back in the early days, AWS turned the company's excess and underutilized computing resources into a source of income. Essentially, AWS, before it ever became the powerhouse it is now, was a mechanism by which Amazon turned a sunk cost into an additional stream of income.

Today, of course, Google and Microsoft (and, to a lesser extent companies like Rackspace and GoDaddy) offer IaaS capabilities. But as the Statista chart below shows, Amazon still remains the market share leader and the provider that brand names like Spotify and Airbnb -- and even the CIA -- rely upon.

So what are the innovation lessons we can learn from AWS? First, of course, AWS itself has fostered innovation in incredible ways. As the Atlantic's Robinson Meyer stated, "It's not an understatement to say that AWS is the piece of infrastructure that has enabled the current tech boom."

But there are more lessons here. First, Amazon started AWS as a way to gain more utilization out of already sunk costs. It's definitely a good idea to look at your operations and explore where you might find additional streams of income from the assets and resources you already have.

Second, and perhaps more important, AWS heralded a complete shift in how we think about IT. As ZDNet's Editor-in-Chief Larry Dignan put it, "Enterprises don't have to be hamstrung by legacy infrastructure. The cloud can enable you to move fast and absorb innovation."

Join Discussion for: Why Amazon is the king of innovation: AWS,...