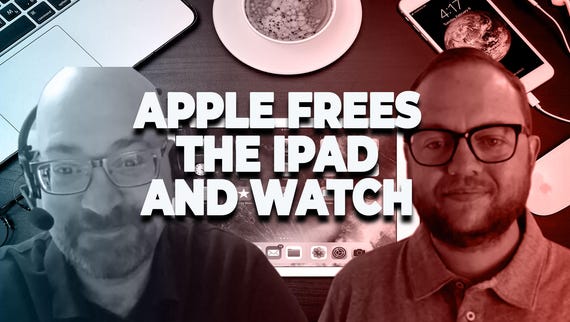 At the launch of the iPhone, Apple offered that the new device would usher in an era of desktop-class websites on the go. At the time, many phones offered only sparse textual summaries of websites in their mobile browsers. While the iPhone version of Safari was more capable than that of contemporary rival browsers such as Microsoft's Pocket Internet Explorer, a wide gap between the fidelity and functionality of sites on mobile versus desktop platforms remained.

A decade later and despite the rise of apps that often substitute for and outperform mobile websites, developing websites for mobile devices has transformed from afterthought to primary target. But there are still many websites that don't function as well as they do on desktop platforms; these deficiencies become more evident on larger displays such as tablets where there is more of a laptop-like experience expectation. To address the disparity, Apple and Google have taken divergent paths to improving the tablet-class browsing experience that will have surprising outcomes for their browsers depending on where they are running.

Let's start with Google. As it inched toward its last products in the tablet category, the company swapped in Chrome OS for Android. Among its justifications was that Chrome OS -- which uses a desktop-class version of Chrome -- could provide a better web experience than Android could. With Google now exiting first-party tablets, there is some doubt as to the future of Chrome OS in the form factor. Meanwhile, Samsung, virtually the last major brand standing in the Android tablet market, recently introduced new Galaxy Tab devices stuck with the same subpar version of Chrome running on Android.

Apple has also dropped iOS from its tablets, but that was only to replace it with iPadOS, a supercharged version of iOS that preserves compatibility with its smartphone cousin. As part of iOS 13/iPadOS, Apple will release a new version of Safari that aims to virtually eliminate any compatibility issues with its desktop counterpart when viewed on an iPad. Why Google couldn't similarly improve Chrome on Android instead of walking away from Android on tablets is a mystery. Perhaps the company thought the other benefits of Chrome OS merited inclusion. Perhaps it wanted to invest in a better touch experience anyway for 2-in-1s. Or perhaps the need to support Chrome on inexpensive Android devices precluded the system requirements that a true desktop-class browser needs.

Whatever the reason, there will be a tablet version of Chrome that boasts far stronger desktop compatibility, the one that runs on Apple's platforms. That's because browsers on iPad OS must use the Safari rendering engine. As Apple improves that engine, even competitive browsers benefit. That the world's most popular browser should yield such a subpar experience on the world's most popular operating system when both are controlled by the same web-championing company is a strange and sad scenario for Android users. Google, which updates Chrome and Android on more divergent cycles than Apple updates Safari and iOS, will surely close the desktop gap at some point. Nonetheless, for now, Chrome users who want the best tablet browsing experience should be looking at an iPad.

4 ways Apple will change how your browse the web on your iPhone and iPad
Using Safari is about to get a whole lot better.

Join Discussion for: Why iPadOS is shaping up as the best mobile...