What, Apple worry? Just days after Samsung launched the Galaxy S4 , Apple has stepped up its marketing efforts with a list of 12 reasons why it reckons the iPhone 5 trumps any other handset.

The 'Why iPhone' page, added to Apple's site over the weekend, set out why it believes "There's iPhone. Then there's everything else", including taking pot shots at fragmentation and malware associated with Android and "large, off the shelf batteries" found in rival devices.

Among the apparent Samsung-bashing is mention of the iPhone's design and aluminium casing, made with the "precision of a finely crafted watch": likely a jab at Samsung's continued reliance on plastic at a time when others such as HTC with its latest One device have turned to full metal casing.

There's also the Retina display, which allegedly won't let users settle for anything less after trying it, while the iPhone's custom, non-removable battery is also cited as an apparent benefit, along with the formerly Samsung-made A-series chip (the rival to Samsung's Exynos 5 series chip) .

Another issue Apple is hoping to make hay from is malware found on Android — something Apple's head of marketing Phil Schiller leapt on this month via his Twitter account. 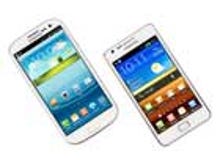 Galaxy S4: Samsung's so far ahead in the Android race, should it start worrying? Samsung is the unchallenged king of Android handsets. So where can it go next?

The 'Why iPhone' page notes that the App Store is home to over 800,000 apps "all reviewed by Apple to guard against malware".

"Other mobile platforms have a myriad of fragmented store options, resulting in availability issues, developer frustration, and security risks," says Apple. iOS updates also download to the iPhone rather than Android, which is often distributed via the carrier.

Apple has done a better job than Google of keeping malware of the App Store, although it's worth noting most Android malware is found outside Google's official store, which it protects with its Bouncer malware app scanner.

Is the new campaign a sign that Apple is beginning to fear Samsung Galaxy's appeal with consumers? It's hard to say, but it comes at a time that the Galaxy brand reaches a level of ubiquity and recognition that no other Android device has so far.

As ZDNet's Andrew Nusca points out , with the Galaxy S4, Samsung has managed to achieve what few other Android device makers have — a true flagship that is recognisable and carries meaning to consumers by its name alone.