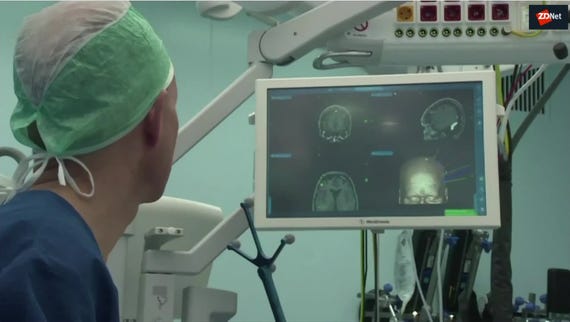 Three years ago, two Caltech academics had a chance conversation at a party. That casual chat over whether chips could be made to act like MRI, the imaging technology that hospitals use to see inside patients' bodies, led to an entirely new type of chip that could enable the creation of a swathe of next-generation medical treatments.

"We had some general discussion and he asked me 'is it possible?' and I told him 'yes, I think we can do it'," Emami said.

The conversation took place between professor of chemical engineering Mikhail Shapiro and professor of electrical engineering Azita Emami. It involved whether microscale processors could be developed that were able to respond to magnetic fields in the same way as atoms in the human body do under MRI, thereby demonstrating their exact location. If so, they could be used to deliver drugs exactly the site they're needed, with sub-millimetre precision.

Almost any drug that a patient takes orally will have an effect across the body -- sometimes that effect is wanted, often it's not. If a microscale device could be used to make sure that the drug could be delivered to the problem area, and only that area, it could potentially drastically reduce unwanted side effects from pharmaceutical therapies.

But delivering a drug to exactly the right place is a lot harder than it sounds -- a peptic ulcer, for example, is typically only around 1cm wide, while the human gastrointestinal tract is around 10m in length -- and no one has yet been able to make chips that can share their location reliably enough to find that needle in a haystack. Historically, attempts to localise such devices had looked at triangulation as the way forward, but the technology hasn't been able to work at a small enough scale -- it works in metres, not millimetres.

"The problem that we're trying to solve is a longstanding problem in biomedicine, and microscale devices in particular. The promise of these devices is that we're going to have all these microscale robots or microchips roaming around our bodies diagnosing disease or delivering therapies. One of the big challenges is that we don't have very good ways to communicate with these devices in the body and discern their location," Shapiro said.

Which is where Emami and Shapiro's idea comes in. The pair's ATOMS (addressable transmitters operated as magnetic spins) devices borrow principles from magnetic resonance imaging, better known as MRI. In MRI scans, when the atoms that make up the human body are subjected to a magnetic field gradient, they all resonate at different frequencies. By knowing which frequency an atom resonates at, an MRI scanner can build up a picture of all the different structures under the skin, atom by atom.

The integrated chips that power ATOMS devices also resonate at different frequencies under a magnetic field gradient, showing their location as they move through the body.

The pair initial discussion explored "why don't we just make microchips behave like atoms? We can design these microchips that they will have a particular resonance frequency, which will shift depending on what magnetic field they're experiencing. We can have all of these devices in the body that are identical to each other, but we can read put their locations by applying a magnetic field gradient and looking at the frequencies that are coming out," Shapiro said.

Among the challenges inherent in translating that idea into a fully-functional ATOMS device was making a device that was small enough to move through the tiniest structures of the human body yet big enough to pack in all the features it needs.

Initially, Emami thought "we need to integrate multiple devices to build it, but that's not ideal, because you only reduce the size of the device if you can put everything on a single integrated circuit chip. Power consumptions and size were my main concerns".

"This was not a straightforward design problem: we had to work on a lot of trade-offs between, for example, the sensitivity to the magnetic field versus how much power it consumes, or what frequency resonance range do we want it to resonate within, which then can determine how deeply inside the body can we localise it," Shapiro said. "Because of the unique nature of the devices, there weren't too many precedents for us."

A lot of the work in building the devices fell to a graduate student, Manuel Monge, who was able to balance the trade-offs, and create a prototype device that can localise itself using the MRI-type principle. ATOMS can give its location accurate to 360 microns, without the need for a strong magnetic field; the device was tested using a magnet in the lab.

The next step for the researchers is to add the sensors to the prototype ATOMS, so it can transmit data as it travels. Introducing wireless power is also on the agenda, either using small battery, or inductive or RF power so it can be charged externally.

Further down the track, it's hoped that the ATOMS devices can be used therapeutically.

As well drug delivery, the chips could potentially be used for a range of other healthcare applications: for example, equipped with the right range of sensors, ATOMS devices could sample various biological markers such as glucose level, microfauna, or electrical activity, as they move through the fluid around the brain, bloodstream, or the digestive tract. Shrunk down to a grain of rice, a patient could swallow any number of the robots to keep track of their health metrics, mapping local variations as they go.

Various industries have expressed an interest in using ATOMS. For example, oil companies have suggested they could be used to measure the pH and temperature in pipes as they flow through them. However, the technology will most likely see its first commercial outing in the medical industry. The researchers have already had conversations with some of healthcare's biggest companies as to how the technology could be taken forward.

"If we can send not only sensors but devices that can release bacteria or certain drugs in the intestine, and know where they are, then we can trigger them to release any agent that we what at the location we want. That is very beneficial," Emami said.

While the researchers have managed to overcome all sorts of technical and conceptual hurdles to create the ATOMS prototype, there's still one more question that needs to be answered before the devices can be produced for use in real patients: what happens when they're no longer needed? If the devices are in the gastrointestinal tract, there's clearly an easy way for them to exit the body, but if they're in the cerebrospinal fluid or the blood, how can they be disposed of once their job is done?

"That's a question we haven't fully answered. Ideally we want sensors that are biodegradable, and after a certain amount of time they can be absorbed or degrade by the body, but we are not there yet, because those technologies do not allow us to do a lot of processing or sensing. They're very primitive in terms of their functionality. To build electronics that are not only high performance but biodegradable -- that would be the holy grail in the future," Emami said.

Surgery in virtual reality: How VR could give trainee doctors the feel of real patients

A UK startup is using HoloLens headsets and off-the-shelf hardware to recreate the experience of the operating theatre.

Virtual reality in the enterprise: What you need to know [Tech Pro Research]

Virtual reality is primarily a consumer play for now, but it's worth pondering pilots as HP, zSpace and others try and build a business VR ecosystem.

Join Discussion for: Why swallowable robots could be the future...