Will Obama have a laptop? (Answer: No. Here's why.)

Notice that famous photo of Obama sitting at his desk in the Oval Office?Notice the lack of one basic tool most office-bound workers have that he doesn't?
Written by Andrew Nusca on Jan. 23, 2009 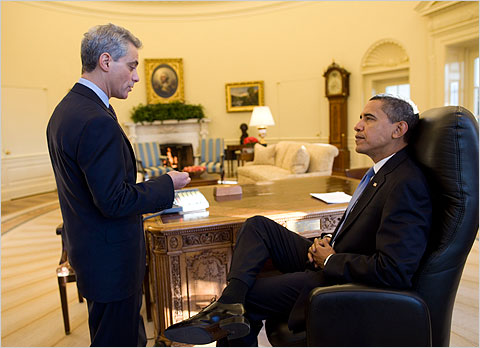 Notice that famous photo of Obama sitting at his desk in the Oval Office?

Notice the lack of one basic tool most office-bound workers have that he doesn't?

While the commotion over whether or not the president will be able to keep his BlackBerry (he will -- sort of) has died down, there's a lot more tech to address. Like, you know, a personal computer in 2009.

According to Slate's Nina Shen Rastogi, Obama probably won't get a dedicated office computer, like his predecessors George W. Bush and Bill Clinton.

Before Obama, presidents went without e-mail, both to keep their messages secure from hackers as well as to sidestep the Presidential Records Act of 1978, which requires that all correspondence be archived and eventually made available to the public. (Plus, the last thing we need is our Commander-in-Chief wasting away time on Twitter. Or do we?) Officially, it's the president's decision whether he wants a computer with advisement from the White House counsel and the White House Communication Agency within the Department of Defense, according to Rastogi.

Either way, we know the White House's new inhabitants have proclaimed it in the tech "dark ages."

So how does a president get along in the 21st century? Well, for one, delegation: a "fleet of computer-equipped staffers" sits directly outside his office doors.

Obama could bring a laptop into the Oval Office, which does indeed have an Internet connection, first used by Bill Clinton. Naturally, there's no White House Wi-Fi (so don't bother looking for a secured server "whitehouse_gov"), but Air Force One does have connectivity.

In 2003, the Executive Office of the President approved a policy prohibiting the use of nonofficial e-mail programs and instant messaging systems on official White House computers. But as Google-ified Obama staffers plug in and log on, that may change.