The wind is strong over the Great Lakes but Ontario says it needs more research on wind farms within freshwater. The Canadian province places a moratorium on all offshore wind projects.
Written by Melissa Mahony on Feb. 14, 2011 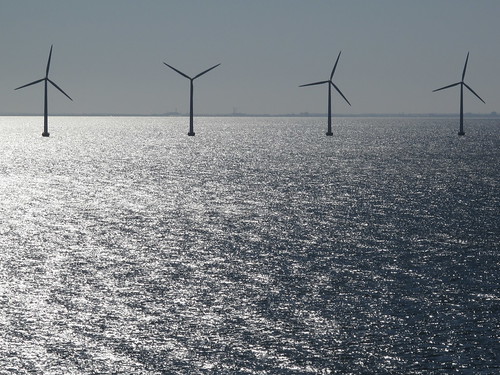 The Ontario government put all plans for offshore wind power on hold last Friday. The province canceled a contract with Windstream Energy for a wind farm on Lake Ontario. It also said it would not approve the four other projects on deck until it gained more insight into the impact of wind power within freshwater environments.

So far there is only one such wind project in the world.

Canada's Wind Energy Association, not surprisingly, isn't pleased. Ontario lifted a ban on offshore wind development about two years ago, only to now resurrect it. In a statement, its president Robert Hornung said:

Ontario is proving itself a leader in driving a new clean energy future that delivers emission-free power and new jobs for our skilled trade workers. This is an unfortunate decision that surrenders the province’s leadership role in exploring the potential for offshore wind energy in the Great lakes and creates significant uncertainty for investors.

One challenge for the emerging industry includes placing the turbines far enough from shore to avoid NIMBY (Not In My BackYard) issues, but in some places those waters run too deep. Taller turbines are a possibility, but they'll likely come at a heftier price.

Ontario has the potential to develop 2,000 MW of offshore wind power over the next 15 years, according to a report issued in late 2010 by the Conference Board of Canada, a non-profit research group.

In a lake in Sweden, Dynawind's 10 turbines whir, on average, 4 miles offshore. They stand in about 330-foot waters of Lake Vänern and have a capacity of 30 megawatts. The wind farm just went commercial last May ,but their performance (economic and environmental) might guide others looking to extend wind power's reach into large, freshwater bodies of water.

Some of these others have their sights on the American portion of the Great Lakes.

According to a Christian Science Monitorstory last spring:

"You will never find a better spot than the Great Lakes," says John Kourtoff, CEO of Trillium Power Wind Corp., a Toronto company that plans to begin erecting turbines in Lake Ontario as early as 2013.

Last summer, The New York Power Authority began considering four proposals for its GLOW Project (Great Lakes Offshore Wind). The project aims to construct wind farms in either or both Lake Erie or Lake Ontario, with 120 to 500 megawatts of total capacity. Further along are Scandia Wind Offshore's 500-megawatt project for Lake Michigan and Ohio's plans for a 20-megawatt farm near Cleveland about 6 miles into into Lake Erie.