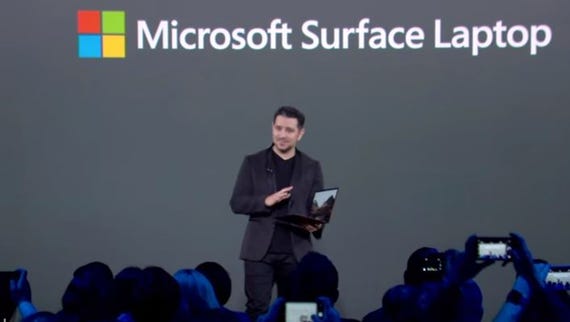 Microsoft pitched today's big product unveiling in New York City as an education event, but it turned out to be much more than that.

Yes, there were plenty of teachers on stage, and the slick videos that showed off its new education offerings were filled with happy students in classroom settings.

But the two products that took center stage, Windows 10 S and the new Surface Laptop, ultimately have a reach that goes well beyond the schoolhouse.

In the run-up to this event, there was plenty of speculation that Microsoft was planning to introduce a competitor to the Chromebook, designed by Google and well supported by PC OEMs. The cheap, easy-to-manage Chromebooks have been surprisingly successful in the US education market.

Microsoft actually did introduce a would-be Chromebook killer today, but not the way anyone expected.

It certainly wasn't the Surface Laptop.

At a starting price of $999, the newest member of the Surface family certainly isn't a competitor to any Chromebook except perhaps the spectacularly overpriced Google Pixel. Rather, it's an extremely worthy option in the 13-inch premium laptop category, alongside the 2016 13-inch MacBook Pro, Dell's XPS 13 9360, and a few others.

I know many IT pros and corporate executives who would kill for a Surface Laptop. And the first thing they would do is upgrade it to Windows 10 Pro.

The real Chromebook alternative is Windows 10 S, a solution that addresses some of the same features, benefits, and pain points as ChromeOS and runs on just about any hardware.

Microsoft said that its PC partners will be selling PCs running Windows 10 S around the same time it begins shipping the Surface Laptop (in June). There was no third-party hardware onstage at this event, but late last week, Acer showed off a line of new portable PCs that includes the Aspire 1.

At roughly 3.7 pounds, the Aspire 1 is hardly svelte. And with a Celeron or Pentium processor, 4GB of RAM, and 32GB or 64 GB of eMMC storage, it's not exactly a powerhouse either. But that's about what you'd expect with a Chromebook-competitive price tag of $219.

The question then becomes: Can that type of system running Windows 10 S overcome the traditional problems of cheap PCs?

Even with those modest specs, a machine like the Aspire 1 running Windows 10 should be able to start up very quickly and resume almost instantly. It also should be able to handle average productivity workloads, although you probably wouldn't want to use it for video editing.

The problem with most cheap PCs starts right out of the box -- when manufacturers load them up with crapware/bloatware that makes the experience miserable from Day 1.

Add in the profusion of janky software that your average consumer can't resist installing, then toss in some aggressive adware or malware that sneaks past security defenses, and pretty soon you have a mess that needs to be cleaned up every six months. That's the classic timeline for "Windows rot."

And then there's the update problem, which Windows 10 S solves fairly neatly. Packaging apps and delivering them through the Windows Store means they can be updated automatically. No more third-party updaters running as background tasks on their own schedule. Hooray!

If that all sounds too good to be true, consider the alternative timeline for Windows 10 S. In the darkest timeline (thank you, Community!), Windows 10 S suffers the same fate as (shudder) Windows RT.

Microsoft unveiled Windows RT (a variant of Windows 8) on the Surface RT in 2012. It seemed like a good idea at the time, for many of the same motivations that are driving Windows 10 S. Sadly, it was a spectacular, colossal flop, leading to a writedown of nearly a billion dollars and scuttling a few Microsoft careers in the process.

The problem with Windows RT is that the selection of available apps was woefully insufficient, and having Office as part of the package wasn't enough to overcome that handicap out of the starting gate.

When the first Windows 10 S machines ship in June, they will inspire some of the same "Wait, it can't run that app?" reactions from the first wave of consumers.

Systems running Windows 10 S will be locked down so that the default browser is Microsoft Edge, and Microsoft says that default can't be changed.

Now, Edge has improved dramatically as a browser in the past two years, and it's done an impressive job of masquerading as Chrome. But it's not Chrome.

And that might be a deal-breaker for some buyers of Windows 10 S laptops, who will be faced with a difficult decision: Upgrade to Windows 10 Pro and gain the ability to install Chrome while giving up the security/manageability advantages that come with Windows 10 S, or put in an RMA ticket.

It's possible that Google will take a look at Windows 10 S and decide that it needs to adapt Chrome so that it can be installed using the Windows Store. That's probably a nontrivial development effort, but not at all out of reach for a company with Google's development chops.

That effort might be worth it if the new OS is a hit and suddenly represents an installed base of millions of PCs that can acquire apps only through the Store.

After Windows 8 was released, Google jumped quickly into the new Microsoft ecosystem, releasing a "Metro-style browser" that conformed to Microsoft's odd design guidelines. It continued that development for 18 months or so before eventually giving up on Windows 8 around the same time Microsoft did.

Google doesn't have an easy decision here. Do they become one of the most important pillars of support for a competitor's ecosystem? Or do they say no to the Store and risk missing a major inflection point in personal/corporate computing?

And, just as an aside, did anyone else notice that Apple, which once owned the education market, has become a minor player?

This will be an intriguing battle to watch.

Join Discussion for: Windows 10 S: Chromebook killer or the second...