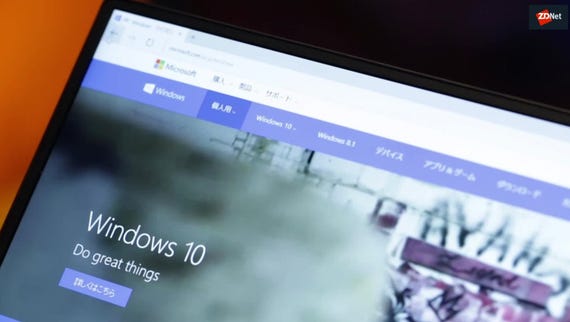 We're on the final countdown for Windows 10. On July 29, Microsoft will offer free Windows 10 upgrades to hundreds of millions of PCs users. Most Windows 10 users will also get a new default web browser: Edge. But is Edge actually be better than Chrome, Firefox, or Opera? Or, for that matter, Internet Explorer (IE) 11? Let's see.

With just over six weeks before Windows 10's launch, we can start benchmarking programs on it to see what to expect. True, all these web browsers' performance will improve once Windows 10 has rolled out, but the operating system is mature enough that we can start to see just how fast web browsers will run on it.

Edge itself is not a fork or child of IE. It's based on a new rendering engine of the same name. IE 11, which will also be included on Windows 10 PC editions, will continue to use its existing "Trident" (MSHTML) web-rendering engine.

Microsoft claims that the Edge rendering engine is both new and improved when it comes to standards and interoperability. At the same time, Microsoft admits that some older web sites, presumably ones that had been optimized for earlier versions of IE, will require users to use IE 11 and its legacy Trident engine.

Edge, though, is more than just an optimized web browser. It has, at this point, the unique feature of integrating with Cortana, Microsoft's digital assistant and rival to Apple's Siri and Google Now.

Gallery: Say hello to the early days of web browsers

That's fine. But, when it comes to web browsers, most users simply want to know if it will work well with the web pages they use every day. To determine just how quickly and smoothly, Edge, and other web browsers, will work on Windows 10, I used several widely used web browser benchmarks.

I ran these performance tests on the latest 64-bit build of Windows 10 that was available in mid-June: 10130. The PC I used for these benchmarks was an Asus CM6730. This desktop PC is powered by a third-generation 3.4Ghz Intel Core i7-3770 processor. This is supported by a Nvidia GeForce GT 620 graphics card. The PC also has 8 GBs of RAM and a one TeraByte hard drive.

On this system, besides the versions of Edge and IE 11 that comes with Windows 10, I looked at the latest versions of the most popular desktop web browsers. These are Chrome 43, Firefox 38, and Opera 30. I didn't include Safari in this round-up because Apple no longer releases new major versions of Safari for Windows. Apple does, however, still supports Safari on Windows with security updates.

SunSpider 1.02: This web browser benchmark from the open-source WebKit rendering engine project is the oldest of the tests. This benchmark tests the core JavaScript language only, it doesn't test, for example, JavaScript's Document Object Model (DOM) or other browser application programming interfaces (API) performance.

By SunSpider's count, where lower scores are better, the winner was... Internet Explorer 11!? Admittedly IE won within SunSpider's margin of error over Edge, but I ran the tests multiple times and IE kept winning by razor thin margin.

What I think is causing this is testing code in the Edge rendering engine. By the time Windows 10 actually ships, I expect Edge to be much faster than IE 11. Coming in the next three places, from fastest to slowest, were Firefox, Chrome, and Opera.

Kraken 1.1: This benchmark, which was based on SunSpider, also measures JavaScript performance. To this basic JavaScript testing, it added typical use case scenarios. Mozilla, Firefox's parent organization, created Kraken. Like SunSpider, the lower the score, the better the result.

With Kraken, we see a very tight race. Chrome wins by a nose over Opera and Edge. Firefox lags a bit behind, and way, way in the back we find IE 11.

Why would IE 11 stumble so badly here? I'm not sure. I strongly suspect, since Kraken's data load is much larger than SunSpider's, Kraken's tests were conducted more in main memory rather than in faster, but far smaller, cache RAM. Once deprived of the advantage of running in fast memory, IE's older rendering engine's weakness was revealed.

Octane 2.0: Google's contribution to JavaScript testing, also includes scenario testing for today's highly interactive web applications. In this benchmark, the higher the score, the better. Octane is not Google specific. For example, it tests how fast Microsoft's TypeScript compiles itself.

Indeed, Edge edges out Chrome for first place in this test. A step behind these two are Opera and Firefox. IE, once more, is staggering far in the rear.

Peacekeeper: This test, from benchmark maker FutureMark, primarily checks JavaScript performance, but it also considers HTML5. For its tests composition, FutureMark analyzed JavaScript usage in such popular websites as YouTube, Facebook, and Gmail. Once again, higher scores are better scores.

Here, Firefox rises to the top. Farther back, you'll find Chrome and Opera. Trailing on the back stretch are Edge and IE.

RoboHornet: Alex Komoroske, a Google Chrome manager, says this open-source benchmark hasn't been updated recently. Still, instead of focusing on JavaScript, Komoroske claims RoboHornet "encompases all aspects of browser performance and everything that matters to web developers, like performance of layout and localStorage."

On RoboHornet, Chrome once more wins. It's followed closely by Opera. Then, Firefox, IE, and Edge are left eating dust in the back.

HTML5 Test: Finally, I checked to see how well each browser complies with today's most up to date and universal web standard: HTML 5. This "test" isn't a benchmark per se. It just shows how close each browser comes to being in sync with the HTML 5 standard. A perfect score, which no one got, would have been 550.

Chrome wins over Opera in a dead heat by this measurement. These two are followed a length back by Firefox, then another step back by Edge, and IE comes in dead last.

So, what's the best browser? Chrome, with three wins, appears to be the best so far. But, Chrome only won by the narrowest of margins. The other browsers, even IE 11, had their moments of glory. That said, it's as plain as the browser on your window that IE is the slowest and least standard of the browsers.

Edge is certainly not clearly superior over its rivals at this point. I foresee the same close competition we've been seeing on Windows 7 and 8.1 between all the major browsers to continue on Windows 10.