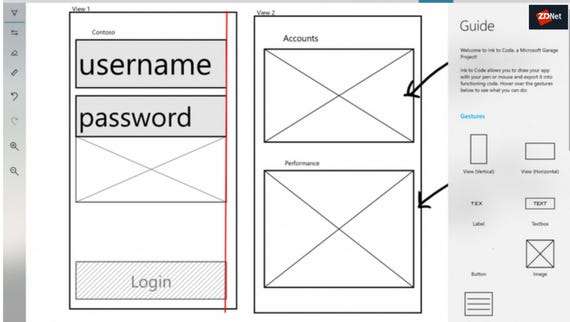 Microsoft's latest app from the Garage Project takes its cue from those great ideas that start life as a sketch on a napkin or scrap of paper.

Instead of paper, developers use a stylus to sketch out elements of an interface on a touchscreen. Sketches are automatically resized and cleaned up to form straight, symmetrical boxes that form the elements of a page.

And, as the name suggests, the apps helps turn sketches into code for Visual Studio and Microsoft's Xamarin mobile app development tool.

Ink to Code can't be used to create a finished app, but can help speed up the earlier phases of development by translating design symbols into labels, text fields, text paragraphs, images and buttons.

To build the Ink to Code app itself, developers at the Garage Project used machine-learning features of Windows 10's latest Ink for object recognition.

While the app will help individual developers build and improve early iterations of an app, Microsoft sees potential for it as a collaboration tool for people with mixed design and coding experience, or a productivity tool for developing ideas.

The app was hatched by members of the Garage Project while the project's future development is currently sponsored by Xamarin, which wanted to open it to the public to broaden the feedback on the prototype.

As such Microsoft calls it a "prototype for prototypes", which will remain with the Garage Project where it can mature into a fuller product that may get additional resources if catches on with developers.

Instead of paper, developers use a stylus to sketch out elements of an interface on a touchscreen.

A new app from Microsoft's Garage incubator uses the same speech-recognition in Cortana, coupled with real-time translation, for hands-free typing.

Microsoft to developers: Here's how to add AI to your apps

Microsoft now has 29 Cognitive Services,programming interfaces for adding AI to apps and services. Here's what's new as of this week.

The new project, called Email Insights, was developed to make searching for emails easier--as long as you use Outlook or Gmail.

Microsoft's Face Swap app may be just for fun, but it packs some powerful image recognition technology.